Ponting, who led the Australian men’s team to 21 straight victories including their 2003 World Cup triumph, hailed the feat of captain Australian women’s captain Meg Lanning and her side.

“What a brilliant achievement,” Ponting told The Age from India, where he is preparing to coach Delhi in the IPL. 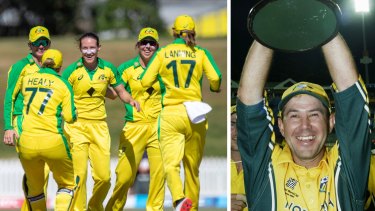 “They are setting a whole new standard for women’s cricket and I hope their big winning streak continues for a long time to come.

“Congrats to Meg and her team for passing our streak of 21.”

Healy, Beth Mooney, Rachael Haynes and Ashleigh Gardner played in all 22 wins of the unbeaten streak, which started on March 12, 2018 against India at Vododara, stretching to Sunday. 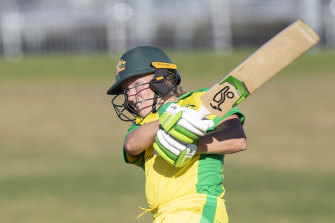 The streak includes series wins over India (away), Pakistan (neutral), New Zealand (home), England (away), West Indies (away), Sri Lanka (home) and New Zealand (home), with Sunday’s win over the White Ferns the first ODI match of Australia’s tour of New Zealand. South Africa is the only top 10 country Australia hasn’t played in that run.

Australia’s 21st ODI win came in October last year against New Zealand at home, with the three-year winning streak taking a lot longer than the 133 days it took Ponting’s World Cup-winning side to claim 21 straight victories. Winning streaks of 17 and 16 by Australia’s women’s team in the late 1990s sit third and fourth in the record book.

“It’s a special record. Probably a lot of players in that room idolised Ricky Ponting growing up,” Healy said post-match.

“He’s exactly how I wanted to bat and take on the game, so for us to break a record that had him all over I think it is pretty special for this group.

“We genuinely hadn’t spoken about it but I think everyone’s got some smiles on their faces, which is pretty cool.”

Healy said the longevity of the team’s success over three years added to the achievement.

Healy guided the Aussies to within 100 of the White Ferns’ total of 212 with a knock of 65 off 68 balls at the top of the order, before Ellyse Perry and Gardner claimed the record-breaking win for Australia.

Unlike the Kiwis, who were 1-4 off their opening four overs with the ball, the Aussies in response got off to a flyer with the bat, with Healy and Haynes taking 11 runs off the first over. 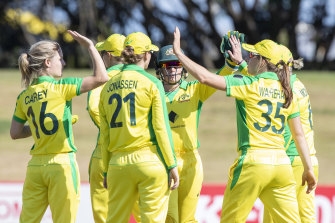 Hayes departed for 14 in the seventh over, before Aussie captain Meg Lanning was out for five just two overs later.

Perry at four partnered with Healy for a 78-run stand to take the run-chase within 100 to win before Healy, who was dropped on the boundary for six to bring up her half century, was caught and bowled for 65 in the 23rd over. Mooney trudged off shortly after with 12 to her name.

But Perry and Gardner continued the score fest, as the Aussies hit 5.5 an over to reach the target of 213 with 69 balls to spare.

Perry’s unbeaten knock of 55 off 78 was effectively chanceless outside of a second-ball caught-and-bowled opportunity that fell short of Hannah Rowe.

Perry’s innings, calculated and risk-less, came in contrast to Gardner’s quick-fire 53 off 41, sealed with a six, which made sure the Aussies claimed victory with plenty of wickets and overs up their sleeve. The unbeaten half century was Gardner’s third at international level, with the unbroken partnership of 79 off 79 capping off the win.

Earlier, player of the match Megan Schutt took 4-32 off her nine overs, taking a wicket with her first ball of the afternoon with a massive in-swinger that bowled White Ferns’ opening batter Hayley Jensen for a golden duck.

Fellow opening bat Lauren Down, who scored just one run off her first 20 balls, top-scored with an admirable 90 at the top of the order, with skipper Amy Satterthwaite (32) and Amelia Kerr (33) making contributions, but New Zealand’s tail failed to wag, leaving the White Ferns with a below-par score.

Nicola Carey also enjoyed the spoils with the ball for Australia, taking 3-34 off 9.5 including the wicket of Down caught and bowled. Healy took two stumpings in the innings.