Australia’s Ashes let-down in 2017 was the driving force behind the national women’s team developing the ruthless edge that has propelled it to the verge of a world record, which its coach believes will stand the test of time.

Meg Lanning’s all-conquering team has its date with destiny on Sunday at Mount Maunganui’s Bay Oval when it aims to eclipse the 21 straight one-day international victories of Ricky Ponting’s men in 2003. 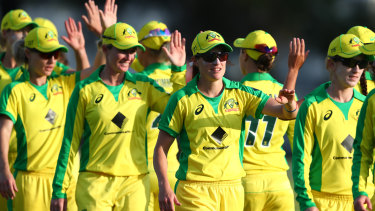 India’s women won 16 on the trot in 2016-17 before losing by eight runs to South Africa. In fact, they won 21 of 22 during that period, though they were blessed by a schedule featuring World Cup qualifiers against less accomplished sides, such as Ireland, Sri Lanka and Bangladesh.

Australia, a runaway leader in the women’s one-day international rankings, have beaten all but the second-ranked South Africa from the top seven nations. They were denied the opportunity by the start of the pandemic, which forced last year’s tour of South Africa to be postponed.

The growing depth in the women’s game means the chances of another epic streak such as Australia’s being repeated any time soon are slim.

“It is going to be a record that will stay for a while,” coach Matthew Mott said on Saturday. “It’s very difficult, it’s a great achievement for the team to have already got to this point.

“In that [world] championship format, home and away, there will be some tough ones coming up. If we get up in this one, it’s a significant achievement in its own right.”

A feature of the Australian women’s unbeaten run is their longevity. They have had to maintain their form for three years. As a comparison, Ponting’s Australians had their 21 wins, including a World Cup final, crammed into five months.

The catalyst for Australia’s women was the disappointment of the 2017-18 Ashes. Though they retained the urn with two games to play in the mixed-points format, they blew the opportunity to win the series outright by dropping the final two T20s.

“I’ve been around five to six years and we’ve always had a very strong team,” Mott said.

“If there was one criticism, we sometimes took the foot off it a bit if we’d won the series or were in a [strong] position. We didn’t quite finish off tours as we’d like.

“Thinking back to the Ashes at home where we allowed England back in to level the series, it was very unsatisfying.

“I think that motivated the team in every match that we played, whether we win, lose or draw.“

The advent of the ICC Women’s Championship has added context to bilateral 50-over series. For Australia, it means there is no such thing as dead-rubber syndrome.

“You don’t want to drop any games,” Mott said. “Every match is crucial and we really try to be consistent in that period of time. Testimony to the way the players have stuck to it and finished off series is why we’re in this position.”

This year’s Rose Bowl series is not just about continuing the trophy’s 22-year stay in Cricket Australia’s trophy cabinet, but gaining intelligence leading into next year’s World Cup. The side starts its campaign at Mount Maunganui, the venue of this series.

Competition for places is also fierce, as highlighted by young star Sophie Molineux’s struggle to break into the XI.