Birmingham: Australian coach Justin Langer says it will be mind over pitch if his team has to bat second in Thursday's World Cup semi-final while England counterpart Trevor Bayliss insists his men won't be "scared".

One of the great expectations of this tournament was that teams were prepared to chase down huge totals, such had been the trend of recent years. But that has changed under the pressure of tournament play, and 16 of the past 20 matches heading into the finals were won by teams batting first. 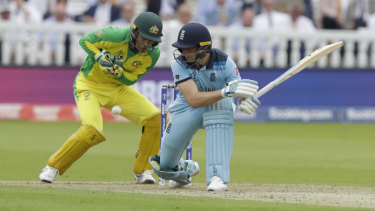 England failed in their run chase against Australia in Lord’s.Credit:AP

That has meant the toss of the coin has become increasingly important, and it again shapes as crucial come the Birmingham clash between Australia and England.

Australia lost two of their three pool group matches when batting second – their only successful chase coming against Afghanistan in Bristol – while England dropped all three of their group chases, including to Australia at Lord's.

Both teams can take some heart from the fact that of the four pool games in Birmingham, there was an even split of wins from batting or bowling second.

England, however, dominated India at Edgbaston when they batted first and made the most of a short boundary square of the wicket, although that won't be such a factor this week for the new pitch used this time is positioned more in the middle of the ground.

Regardless, the toss of the coin could be defining, although Langer does not want his team to think the deterioration of the pitch will be a factor in making it harder to chase.

"We've seen it once for the whole tournament. Maybe once or twice. The England versus New Zealand game seemed to get harder [in Durham]," Langer said.

"It's more batting first at a World Cup than the pressure of the wickets. A lot of teams have chased and won in the last few years, it's become a bit of trend, but not here. I think that's the pressure, not the wickets. When it comes to the day whether you bat first or you bowl first, you've just got to be at your best."

England coach Trevor Bayliss has also attempted to get his team's mindset right in case it has to chase.

"After that the boys made a commitment to going out – win, lose or draw – to play to their strengths and we did that in the next two games [after the loss to Australia] and put in a good performance, so it is about sticking to our processes and how we play well," Bayliss said.

"Over the past four years, we have won 14 of the last 17 times we have batted second, so batting second doesn't scare our guys and the wickets are a little better now than they were earlier in the tournament. We are full of confidence and happy to be in the semi-finals."

While Australia failed in run chases against India at the Oval and against South Africa in Manchester, it should be pointed out they did make 316 and 315 respectively.

The highest successful run chase through the pool group phase was when Bangladesh responded with 3-322 to defeat the West Indies at Taunton.

Don’t forget us: Tasmania to pitch up for Afghanistan Test