Comeback kid Sophie Molineux bailed her team out of jail as Australia avoided the blushes that come with being eliminated from a home tri-series despite another modest performance with the bat.

Australia booked a berth in Wednesday night's final with a 16-run win, eliminating England in the process, but for much of the game they were the side under the pump. 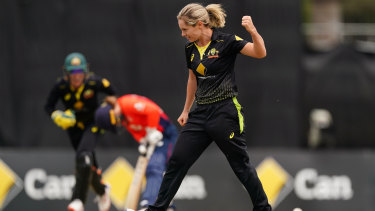 It was, however, far from the complete performance by the Australians though they will draw plenty of encouragement from qualifying for the final despite being well below their best.

They received little from the blades of Alyssa Healy, Meg Lanning and Ellyse Perry. Healy and Lanning remain in a late summer slumber, having struggled in both international and state colours in the new year.

Healy holed out for just one, taking her series tally to 11 from four hits. Since resuming from a month off in the WNCL, Healy is averaging less than 14. She will, however, take confidence from her performance behind the stumps, taking two decent catches and pulling off another two stumpings.

Selling women’s cricket for a song