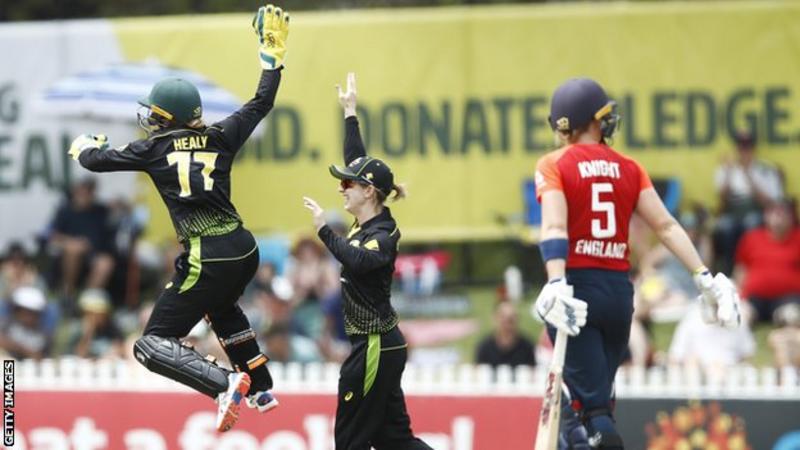 England were knocked out of the women’s Twenty20 tri-series after losing to Australia by 16 runs in the final group game at Melbourne’s Junction Oval.

But England were left to rue some poor shots as the run-rate spiralled.

They fell eight runs short of the 124 they would have needed to pip India to a place in the final on net run-rate.

England would have met India in the final had they won, but defeat meant all three sides finished level on points, with Australia and India going through.

Seventh-wicket pair Katherine Brunt and Lauren Winfield gave it their best shot after coming together at 70-6 in the 13th over, but ultimately England’s batters were unable to take advantage of the opportunity their bowlers had given them in benign conditions.

While Australia and India prepare for Wednesday’s final at the same venue, England have a week before their first Women’s T20 World Cup warm-up game against New Zealand in Adelaide on 16 February.

As they had done in their last game against India on Friday, England won the toss, fielded first and put a mid-innings squeeze on their opponents, with young spinners Glenn and Ecclestone to the fore.

After Brunt struck in the first over, the pair bowled with control and accuracy as Australia’s middle order desperately tried to loosen the shackles.

Leg-spinner Glenn is less than nine weeks into her international career, having debuted against Pakistan in Kuala Lumpur, but vindicated her recall in place of seamer Freya Davies as she did not concede a boundary.

Slow left-armer Ecclestone is still only 20 but she has already established herself as one of the world’s leading spinners, and is often Heather Knight’s go-to bowler when the England captain needs to apply the brakes.

England bat deep when fielding an XI including Winfield as a specialist batter at number eight, but there was too much left to do by the time she joined Brunt.

Their openers have been short of runs in this tournament, and both fell cheaply to young pace bowler Tayla Vlaeminck (2-18), who bowled her four overs straight through.

Danni Wyatt hit a couple of early boundaries but was struck a glancing blow by a fierce Vlaeminck bouncer, and after passing a medical check, was caught down the leg side later that over.

Vlaeminck’s extra pace also accounted for an out-of-sorts Amy Jones, who was bowled through the gate after scratching her way to nine from 15 balls.

The middle order were not able to repeat their rescue acts from earlier in the series as wickets continued to tumble and Australia dried up the boundaries.

Natalie Sciver holed out at mid-wicket when well set, Knight and Fran Wilson were both stumped, and Tammy Beaumont was bowled reverse-sweeping as spinner Sophie Molineux picked up 3-19.

Brunt and Winfield added 37, but the damage had been done.

Why innocent image has people up in arms