Just days after Will Pucovski was concussed, fellow young gun Cameron Green sent an injury scare through the Australian camp after being struck on the head while bowling on Friday.

The boom youngster left the SCG for medical treatment after copping a booming straight drive from Jasprit Bumrah to the side of his face. 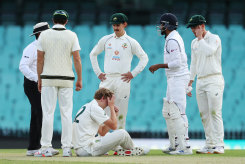 All-rounder Cameron Green goes down after being struck in the head while bowling at the SCG on Friday.Credit:Getty

Australia's preparations for the first Test are already far from ideal after Pucovski was hit on the helmet while batting in the closing stages of Australia A's game at Drummoyne Oval.

Unable to get his hands up to stop the shot in his follow-through, Green was hit with such force that the ball deflected some 15 metres off his head.

Players from both sides and umpire Gerard Abood rushed to Green, who was felled by the impact and stayed seated for about 20 seconds before getting to his feet.

Green did not appear to be in distress as he answered questions from medical staff and was able to walk off the field unaided, acknowledging the applause of the small crowd.

The West Australian has mounted a compelling case to make his Test debut in Adelaide next week after starring with bat and ball in the Shield and for Australia A. 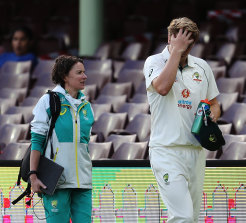 Green leaves the field after the nasty blow.Credit:Getty

If Justin Langer has a few headaches with Australia's batting, spare a thought for his Indian counterparts. Where Australia have a gaping David Warner-sized hole to fill, the visitors have that – and more.

The cautionary phrase "past performance is no guarantee of future results" is often used to warn potential buyers expecting the good times to roll on. The reverse applies for India's long-form batsmen, who have started the tour with a whimper.

After totals of 9-247 and 9-189 on a lively deck at Drummoyne Oval, India's frontline batsmen crashed and burned against the pink ball less than a week before the first Test. Midway through the second session, India were 9-173.

If winning the toss and batting first was a statement of confidence, it took just over an hour for it to be shown as mere bluff and bluster.

The men who next week may have to hold out Pat Cummins, Josh Hazlewood and co at twilight, the most treacherous time to be facing the pink Kookaburra, were back in the SCG pavilion well before sundown.

There was a ring of familiarity in each of the dismissals: player after player paying the price for misjudging the movement off an unusually green SCG pitch or unable to handle the steep bounce from what is essentially a third-string Australian pace attack.

Those taking a glass half-full approach will point to the absence of Virat Kohli and Cheteshwar Pujara, who are skipping this game. Kohli, however, will be gone after the first Test – and the performances this week by India's batsmen does not inspire confidence they can cover for him.

That Jasprit Bumrah, with a Test average of 2.9, was able to stick around for a 50-run partnership for the 10th wicket, outscoring five of India's top seven combined along the way, was a further indictment on how poorly they played.

Green missed out on the bowling banquet but his short spell in the first session changed the course of the game.

The star all-rounder claimed the wicket of Shubman Gill, who was caught behind unable to handle Green's extra pace.

As high a premium as Langer and selector Trevor Hohns are placing on incumbency, there must be a temptation to find a way to fit Green into their XI.

"How will we keep Cameron Green out of the side? To me he's the future of the Australian team," former Test captain and selector Allan Border said on Fox Cricket.

"Do you get them in now rather than wait because they're in such good form? I just reckon, as we've said, it's the future, it's a matter of when he plays. Do you bite the bullet and get him in now?

Gill and Prithvi Shaw had been scoring at a T20 pace, clubbing 72 from the first nine overs. Shaw has his nose in front to partner Mayank Agarwal at the top in Adelaide and though he smacked 40 off 29 balls the Australian bowlers will have liked what they saw.

He erred on the side of recklessness in his short stay, flashing at deliveries well away from his body before an in-dipper from Will Sutherland found its way through an alarmingly wide gate.

The damage was done by Australia's fourth-choice all-rounder, Jack Wildermuth, a last-minute inclusion after the withdrawals of Mitchell Marsh and Moises Henriques.

The Queenslander collected three wickets, including that of the dependable vice-captain Ajinkya Rahane, who fished well outside of off stump and was caught behind.