The Melbourne Renegades have secured one of the world’s biggest names in Twenty20 cricket with Andre Russell to replace No.1 draft pick Liam Livingstone in the first four matches at this year’s Big Bash League.

The West Indies all-rounder, who has 7000 runs at a strike rate just under 170, was snubbed in the draft in August, despite being listed as a platinum player. It will be the second time Russell has played for the Renegades, joining them in BBL04. 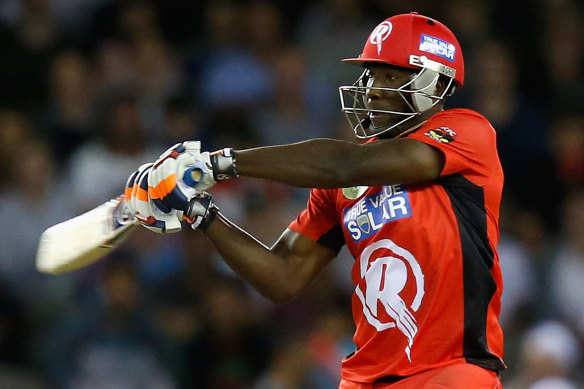 Andre Russell will appear once more for the Melbourne Renegades in the BBL.Credit:Getty Images

The announcement came after Livingstone’s international commitments meant he could not compete in the league’s opening matches.

“We had positive discussions with Andre throughout the draft process and were always keen to try to get him back in red,” Renegades manager James Rosengarten said.

“With Liam’s availability changing after the draft, there was an opportunity to add Andre to our group and we jumped at it.

“Andre is one of the best T20 players in the world; he’s a proven match-winner and exactly the type of player we need. He adds to our team in all three facets of the game – his ability to clear the boundary, take wickets and make things happen in the field,”

Five of the 12 top-tier platinum players costing $340,000 each were overlooked at this year’s draft pick. Only one, David Willey, was available for the whole tournament and was selected by the Sydney Thunder.

“I can’t wait to be part of the Big Bash League again this summer,” Russell said.

“I’m excited to be back in red and will be doing everything I can to help the Melbourne Renegades start the tournament with a bang.”

Archer revved up for Ashes battle as England comeback looms

Jackson Bird signs for Lancashire ahead of County Championship season