London: Australia's retention of the urn will come with the kicker that as many as four of their frontline batsmen, including David Warner, will be under the selectors' microscope for the first Test of the home summer. 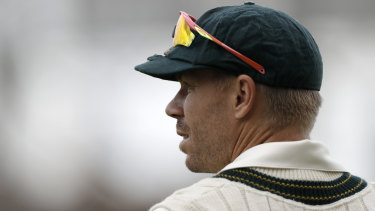 David Warner’s run of outs continued after a controversial call by the video umpire.Credit:Getty Images Europe

While Australia's bowlers have altered their approaches to better suit the local conditions, the same cannot be said for their batsmen, who have been unable to cope with the extra lateral movement on offer with the Dukes ball.

Form across the first few rounds of the Sheffield Shield is likely to be crucial in selectors' deliberations.

For the first time in his 78-Test career, Warner's position in the side is under question due to form. He will be keen to leave England, where he averages 27 in 13 Tests, for the hard and fast wickets of home on which he has dominated.

Warner's 21 centuries and nearly 6500 runs should save him, so too the modest form of fellow openers Harris and Bancroft.

Harris was recalled for the third Test but has produced even worse numbers than Bancroft, the man he replaced, with 49 runs from five innings. Like all of Australia's left-handers, he has struggled against England's approach from around the wicket.

Wade has failed to reach 50 in eight of his nine innings, the exception being his century at Edgbaston which took the first Test away from England.

The former wicketkeeper demanded selection with his sustained run of excellence at the level below but at age 31 will be even more vulnerable if selectors deem the time right to push for youth.

Marsh justified his inclusion at The Oval with his maiden five-wicket haul, though as a No.6 he is judged primarily on his runs. The strong depth in the country's fast bowling stocks decreases the need for Australia to include a regular all-rounder until later in the Test season when the quicks tire.

Australia's batsmen will find the going easier at home facing the Kookaburra ball compared to the Dukes, which has a prouder seam, in England's bowler-friendly conditions.

Khawaja is one who has excelled in Australia, with an average of 53 compared to an overall mark of 41, but failed to transfer his home form abroad.

"It hasn't been easy for the batters, I don't think throughout this series," Smith said.

"We haven't seen any huge totals. There's always been something there, I felt. If you bowl in good areas for long enough I think we've seen you'll get rewards.

"Players who haven't done as well as they would have liked this tour will take a lot from the experience.

"Playing in England's completely different to back home. You have to find ways to play away from home.

"Sometimes you need to change certain little things that can help you play in certain conditions and adapt accordingly. I think it will be good learning curve for all the batters."