Ben Stokes and Ollie Pope dig in with an unbeaten fifth wicket stand of 76, as England finish the first day JUST on top in the decisive third Test with South Africa in Port Elizabeth

Ben Stokes was cast in a familiar role on day one of the third Test against South Africa, charged with bailing England out of a tricky situation alongside Ollie Pope in Port Elizabeth.

Stokes, the freshly minted world player of the year following his match-winning exploits in 2019, was left to carry the can when Joe Root lost his off stump to leave England 148 four but came together with Pope to reach 224 without further loss.

England had threatened to fritter an opening stand of 70 between Dom Sibley and Zak Crawley, but what initially looked like a bowler’s graveyard at St George’s Park was slowly revealed as a trickier proposition as the Proteas gnawed away. 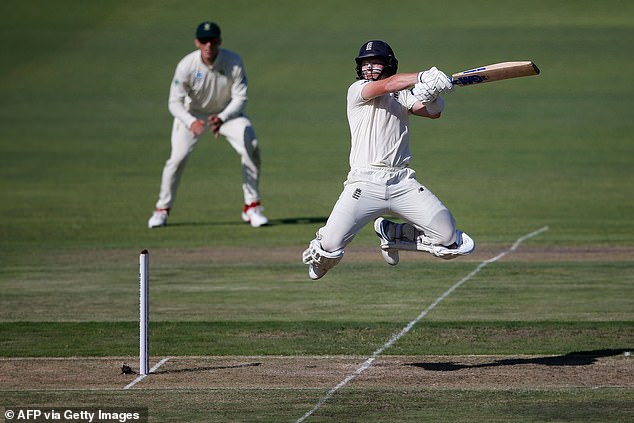 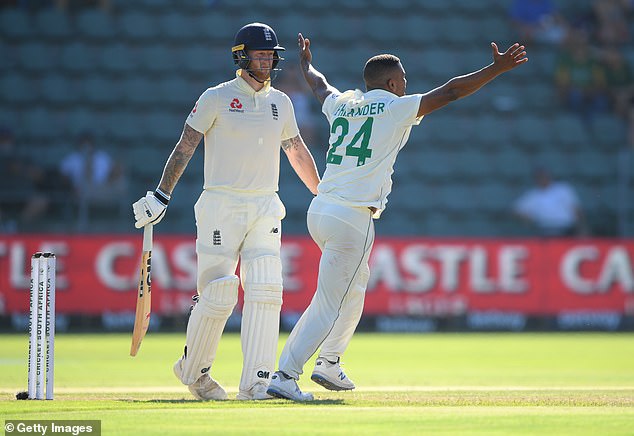 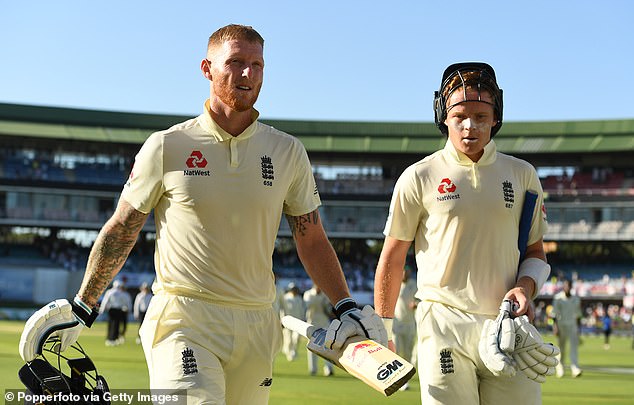 Stokes battled through some tough moments, and no less than three reviews, to finish 38 not out at stumps, with Pope timing his shots better than anyone in a lively 39no.

Sibley (36) and Crawley (44) had earlier become the first English openers to bat out the opening session of a Test since Sir Andrew Strauss and Sir Alastair Cook in 2011, setting up false expectations of a one-sided contest between bat and ball.

Keshav Maharaj played a crucial role in recalibrating expectations, working through 30 unbroken overs for 54 at the Duck Pond End, and doing much more for his side than the solitary wicket told.

The latter watched on as England’s inexperienced openers had a gentle start, with Vernon Philander generating so little off the surface that Quinton de Kock felt able to stand up to the stumps after only seven overs.

Once called upon, it took Rabada all of three deliveries to change the mood, Crawley top-edging a pull agonisingly close to mid-on with just eight to his name. 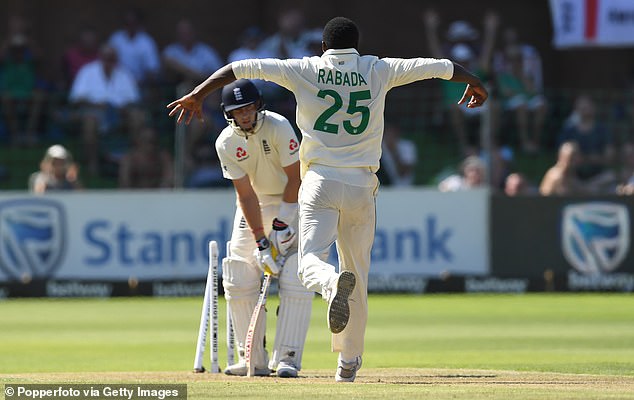 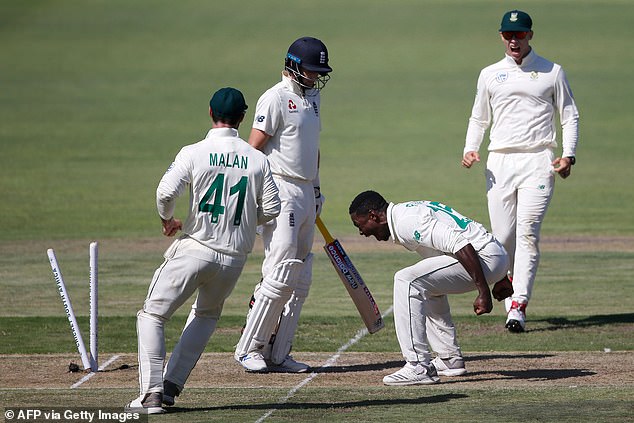 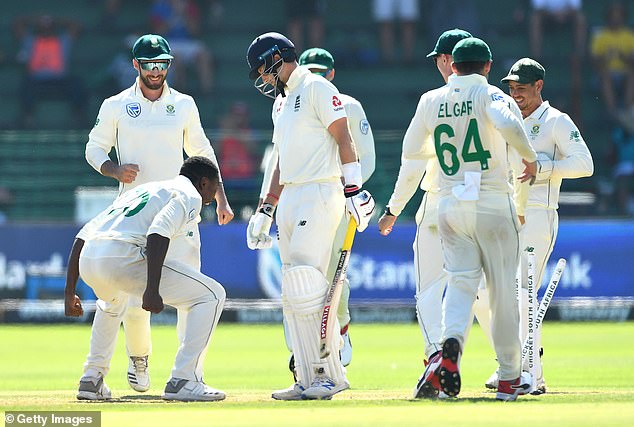 But the rest of the morning belonged to the tourists, not least when Sibley was winning his sparring bout with Anrich Nortje.

A score of 61 for nought suited England just fine given their tendency for first-innings collapses but the scoreboard was moving slowly enough to give South Africa hope.

That they harnessed their opportunity owed much to Maharaj, who locked things down with a relentlessly nagging line and began to find subtle variations in bounce and turn.

That allowed the quicks to attack in rotation and it was Rabada who opened the door, aiming one in at Sibley’s hips and seeing the ball turned round the corner to Dean Elgar at leg gully. The partnership had been broken at 70 and South Africa were on the board.

What initially looked like an unexpected gift was soon revealed as a smart ad-hoc tactic, Crawley almost replicating Sibley’s dismissal on 37 and then falling in similar fashion while six short of a maiden half-century. 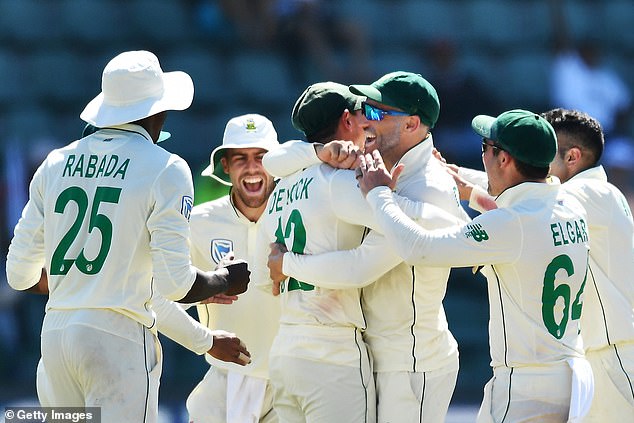 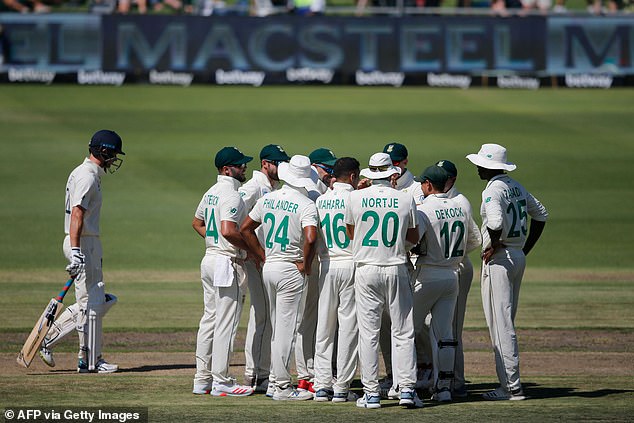 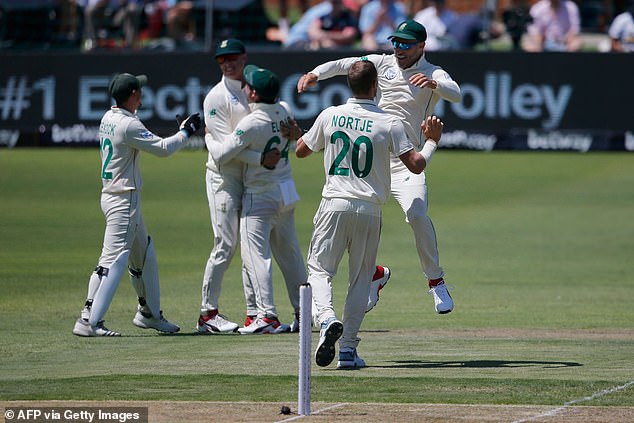 South Africa had taken 56 for two between lunch and tea, stalling English progress and almost adding the big wicket of Root to their afternoon haul.

His first scoring shot was a top-edged sweep that dropped a yard or two in front of fine-leg and he was also lucky to see a badly mis-timed pull land safe.

Maharaj finally got his just rewards when he trapped Joe Denly lbw for 25 – a place-holder of an innings lasting 100 balls that failed to advance the cause in any appreciable way.

The prospect of Stokes and Root in tandem proved better in theory than practice, the skipper gone for 27 when a re-energised Rabada knocked back off stump.

Anyone doubting the importance of the moment need only have watched as the bowler clenched his fists and bellowed his ecstatic celebrations. 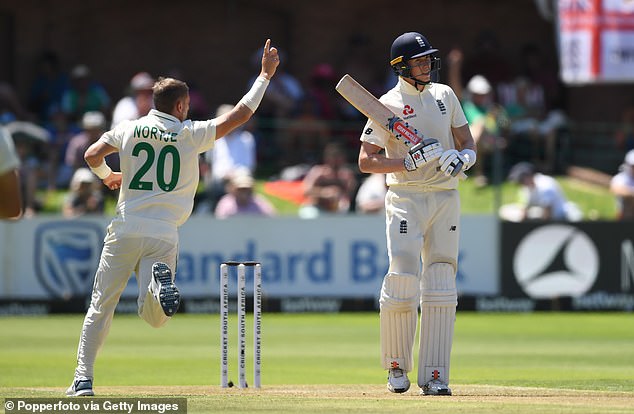 Crawley, moved up to open the batting, made 44 off 137 balls before Nortje took his wicket 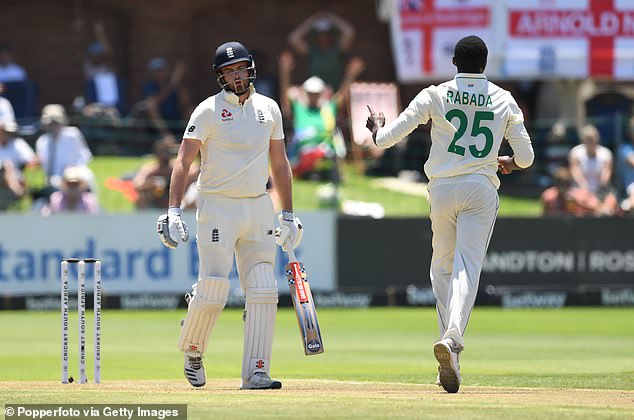 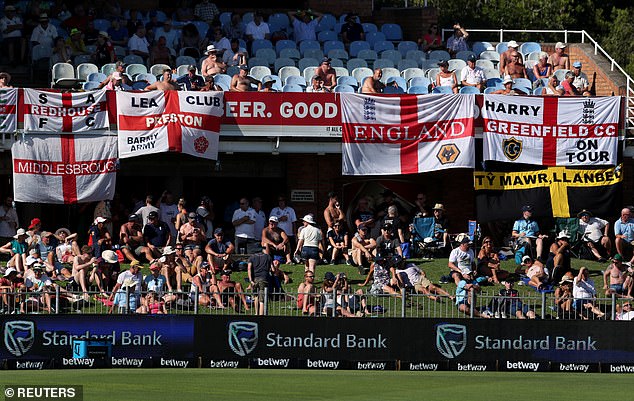 Not for the first time Stokes held the cards for his side but even he found life hard. He survived two DRS referrals from Maharaj before he had scored five runs, one a tight umpire’s call the second less concerning.

Add a half-chance to short-leg on 10 – Pieter Malan did well to get a hand to it – and an edge short of slip on 11 and it was clear that it would not be easy.

He held firm throughout the evening, more dogged than dominant at times, while Pope helped ease the position by reeling off seven boundaries in another highly promising cameo.

Their stand of 76 fractionally tilted the game back in England’s favour, but there is more still to do when battles resumes on day two.