The Sydney Sixers are back in the WBBL top four thanks to a patient 45 not out to skipper Ellyse Perry and a run-a-ball 30 from the player of the match Dane Van Niekerk in their win over the Melbourne Renegades at the WACA.

Set a tricky 120 for victory, openers Perry and Alyssa Healy were dropped early on in consecutive balls.

Lea Tahuhu then snaffled Healy (11) and fellow quick Maitlan Brown grabbed Ash Gardner with a short ball for a duck to leave the Sixers at 2-21. 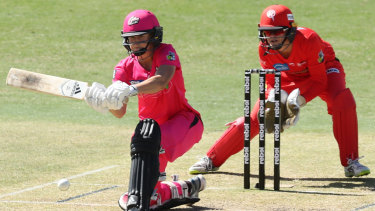 Ellyse Perry made the Renegades pay after being dropped on 28 at the WACA.Credit:Getty

A third-wicket partnership of 29 between skipper Perry and Erin Burns reversed the momentum, Dane Van Niekerk's run-a-ball 30 then helping to keep the target in check.

Perry also had a nervous moment on 28 when she was dropped by Renegades opener Danni Wyatt on the boundary, the chance the 'Gades may have needed to grab a crucial win. 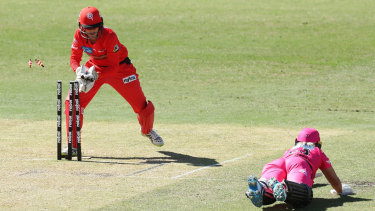 Josie Dooley of the Renegades takes the bails off to run out Dane Van Niekerk.Credit:Getty

Earlier, Sixers' South African spearhead Marizanne Kapp (2-15) had dangerous Renegades openers Sophie Molineux and Wyatt out before a 55-run partnership between Tammy Beaumont (29) and Courtney Webb (25) took the Renegades to a position where they could notch a decent total.

With her best figures for the season, leg spinner Van Niekerk (2-15) kept the Strikers on the back foot, Ash Gardner's 2-23 also making like hard for the South Australian side.

It took a late dynamic innings from skipper Jess Duffin (34 no) to get the 'Gades to 8-120, a modest total they ultimately couldn't defend.

From mortgage advisor to England call-up: Tyrone Mings on his rise to the top