Sydney Thunder star Ben Cutting has fired up ahead of his first clash against his former club, revealing the "hurt" and "disappointment" that ensued after he was pushed out of the Brisbane Heat.

After eight seasons with the Heat, Cutting joined the Thunder this season despite having a year left to run on his contract in Queensland. 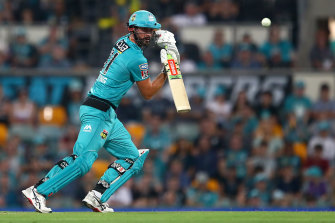 Ben Cutting spent eight seasons with the Heat before moving south to the Thunder.Credit:Getty

Cutting will on Tuesday come up against his former club for the first time.

"With COVID they have cut a lot of people out of management," Cutting said.

"But there is still a couple left in management who were making the decisions and are probably the reason five or six of us did walk away."

James Pattinson, Josh Lalor, Jack Prestwidge, Matt Renshaw and Cameron Gannon also departed the club last year after the club made clear it was looking to reshape its list.

The Heat finished seventh last season and lost to the Melbourne Stars in their opening match of the new campaign on Friday.

"There was definitely something in the water," Cutting said about the change-up in the Heat's roster from last year.

"It was tough for me to let go to be honest, there was a lot of memories there, playing in front of your home crowd, all your mates, Christmas time at home as well.

"There were plenty of other things, I don't need to say too much."

Thunder captain Callum Ferguson, meanwhile, joined a flurry of current and former players calling for DRS to be introduced to the tournament, after multiple umpiring errors on Saturday in the Sydney side’s first game of the season against the Stars.

Opening batsman Usman Khawaja was controversially given out caught behind before Glenn Maxwell and Andre Fletcher were also handed incorrect dismissals.

“I’ve been pretty firm on this one for a long time and I believe it needs to happen and the sooner it happens the better,” Ferguson said after his side’s defeat at Manuka Oval.