About 15 months ago, a couple of dozen chief executives and chairs of Australian cricket state associations gathered in a room at Brisbane's National Cricket Centre and discussed a topic not strictly within their jurisdiction but about which they all had a burning interest: the future of the Australian Test captaincy.

The state executives and senior office bearers were in Queensland ostensibly to talk balance sheets, budgets and the like, with a Cricket Australia annual general meeting being held the next day. 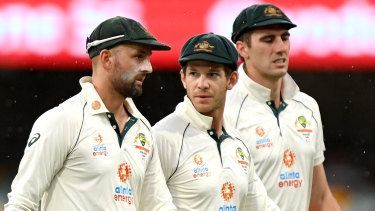 Tim Paine (centre) and Australia have a lot of thinking to do about the future.Credit:Getty

Paine, who was booed by spectators in Brisbane during the presentation ceremony following the fourth Test on Tuesday, is determined to lead the Test squad to South Africa next month and then to England for the inaugural World Test Championship final in July if Australia make it.

There is no indication whatsoever that Langer, fellow selectors Trevor Hohns and George Bailey, and the ultimate decision makers – the CA board – want anything other than for Paine to push on until then and beyond to the Ashes next summer.

But at 36, the same age Adam Gilchrist was when he called it quits in Test cricket, there are warning signs about the road ahead. Paine will be 37 by the time England arrive in the country, the same age Brad Haddin was when he was tapped on the shoulder during the 2015 Ashes.

The problem is who Australia turn to next and that's where the meeting of state cricket supremos in October 2019 comes in.

According to sources in the room that day, officials spoke about the concept of parachuting players such as Pat Cummins into temporary state captaincy roles to build their experience for future national leadership jobs.

Travis Head had already been made captain of South Australia at the age of 21 and Mitchell Marsh was leading Western Australia.

But Cummins, now vice-captain to Paine in the Test team and to Aaron Finch in the white-ball teams, never ended up getting an opportunity to lead NSW and doesn't appear likely to.

He isn't the only player who could have benefited from a stint as captain of his state when available, even if it was just to see if he could handle the extra responsibility on top of being a fast bowler.

Marnus Labuschagne, another possible Test captain of the future given how few players are locked into the XI and have longevity, might also be well served getting a crack leading Queensland, where Usman Khawaja has the job, but there has also been no sign of that occurring.

While states can be reticent to jeopardise the integrity of the domestic competitions even in the name of the national team's interest, the absence of experienced options after Paine shows that a more co-ordinated approach to grooming captains is sorely missing, particularly with Head now apparently out of the picture.

The alternative, of course, is Steve Smith, but the game's powerbrokers will be hesitant to go down that path again unless they really need to.

It's little wonder that Paine, a safe pair of hands in more ways than one for most of the past three years, is still a wanted man.