Nottingham: England collapsed to 183 all out after losing their last seven wickets for 45 runs in the first innings of the first Test against India on Wednesday. 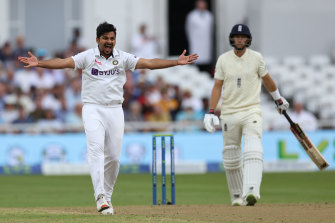 Shardul Thakur celebrates the wicket of England captain Joe Root on day one of the first Test.Credit:Getty

India reached 21 without loss in reply, leaving themselves in a commanding position heading into Thursday’s second day.

Jasprit Bumrah took 4-46 off 20.4 overs for India, removing Burns for a duck in the first over before dispatching No. 7 Buttler for another duck after 18 deliveries, followed by tailenders Stuart Broad and James Anderson. Mohammed Shami took three wickets.

Dom Sibley and Zak Crawley steadied things for England but Crawley fell for 27 in the run-up to lunch, undone by a slender inside edge off Mohammed Siraj.

The score was 3-66 when Sibley followed early in the afternoon’s play, losing his balance and chipping Shami to short mid-wicket having made just 18 in more than two hours at the crease. 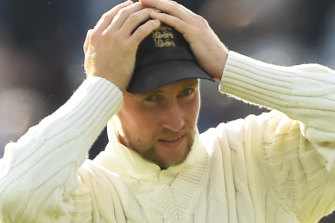 Four of Root’s teammates failed to trouble the scorers at Trent Bridge.Credit:Getty

By then Root was already into his stride and he soon had the 22 he needed to move past Cook’s record all-format mark of 15,737 and later an 89-ball half-century.

Together with Jonny Bairstow he shared a stand of 72 that looked as if it might flip the pressure back on to the bowlers.

The last ball of the afternoon changed things emphatically, Shami going full and straight to Bairstow’s stumps and picking him up lbw for 29.

Clouds gathered during the break and the lights came on, providing perfect swinging conditions for India to press home their advantage at 4-138.

After Lawrence and Buttler departed, England’s prospects hung heavily on Root’s shoulders and he eventually buckled under the weight, lbw to the first ball of a new spell from Shardul Thakur.

Robinson and Stuart Broad followed in quick succession before Sam Curran (27 not out) topped up the total with some last-gasp aggression, including a swiped six off Thakur.

But Bumrah took Anderson’s wicket to wrap things up in the 66th over.

There was enough time for 13 overs of India’s reply, but England drew a blank against Rohit Sharma and KL Rahul, with Robinson their likeliest threat.

The five-match series follows India’s 3-1 series win in March when Root’s touring side failed to get to grips with turning surfaces and the spin duo of Ashwin and Axar Patel.

England are without allrounder Ben Stokes, who is taking an indefinite break to “to prioritise his mental wellbeing” and to rest his injured left index finger.