Jos Buttler and Chris Gayle went toe-to-toe with two titanic centuries as England defeated the West Indies by 29 runs in a scintillating ODI in Grenada.

Buttler made a career-best 150 in 77 balls, blazing his last hundred runs in just 31 deliveries as England posted what looked like a mountainous total of 6-418. 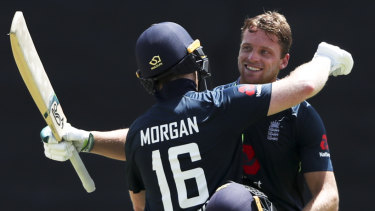 Jos Buttler is congratulated by Eoin Morgan after scoring a ton in the high-scoring ODI.Credit:AP

But Gayle set up a tense finale by smashing 162, before England held on to take a 2-1 series lead.

"I think it just shows there are going to be unbelievable days of cricket and when someone like Chris Gayle's in the opposition you can lose those games," Buttler said.

"We were put under great pressure and I thought the guys did well to stand up to it."

A late salvo from Carlos Brathwaite and Ashley Nurse left the hosts needing 32 from 18 balls to make the second largest chase in ODI history but Adil Rashid (5-85) wiped out the last four wickets in the 48th over to bowl them out for 389.

Despite the leg-spinner's late intervention, Gayle and Buttler were the day's headline acts, hitting 26 sixes and 24 boundaries between them in a furious display of power-hitting.

England ultimately had the stronger supporting cast, as Eoin Morgan made a 103 of his own during a 204-run stand with Buttler.

England's innings was the highest ever on Caribbean soil and sits third on their all-time list, thanks in part to 154 runs from the final 10 overs.

Buttler and Morgan came together at 3-165, with Joe Root having fallen cheaply, and heaped on another 204 runs together in less than 21 overs.

Gayle is one of a handful of players who would not shirk from chasing 419 and the 39-year-old Jamaican picked up Buttler's baton with a ton of his own. 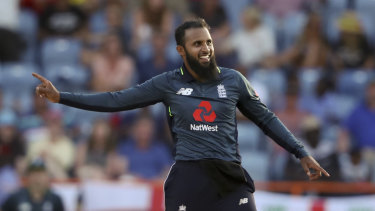 Adil Rasheed stunned the Windies with four wickets in one over to wrap up the game.Credit:AP

He teed off immediately, clattering Chris Woakes for five sixes in nine balls.

The West Indies seeking 95 from the last 10 overs and they were on the cusp of something special when Rashid kept his composure by removing the dangerous Braithewaite (50) and Nurse (43) before wrapping up the tail.

Aussies can stump Poms for brains