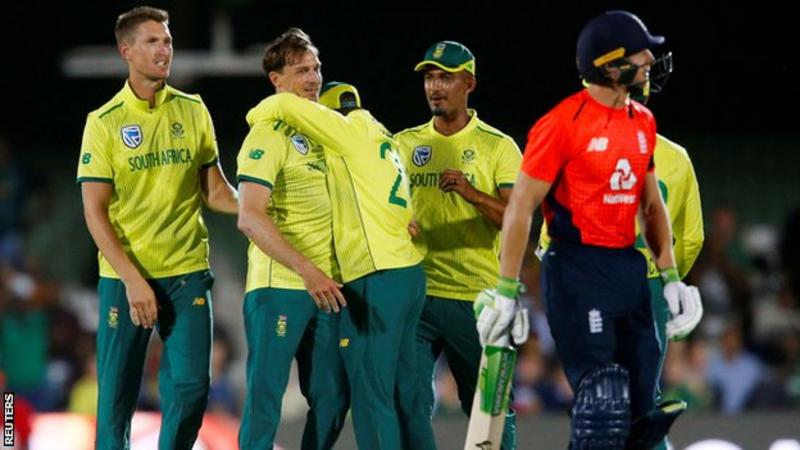 England have plenty to learn in the run-up to the Twenty20 World Cup after their one-run defeat by South Africa, according to captain Eoin Morgan.

The tourists failed to chase 178 in the first of a three-match series in East London.

“We should be winning that 10 times out of 10,” Morgan told the Test Match Special podcast.

“It’s about learning, going through a process we’ve gone through over a number of years to try to get better.”

After winning the 50-over World Cup last July, England will look to become the first men’s side to hold both global limited-overs trophies simultaneously at the T20 World Cup in Australia in October and November.

On Wednesday they recovered from a poor start with the ball and in the field to limit the home side to 177-8.

They were coasting the chase when Jason Roy was making 70 from 38 balls, only to lose three wickets in four overs.

Even then, Morgan’s 52 took them to needing seven from seven balls, before the captain was caught at long-on from the final delivery of the 19th over.

“Getting out off the last ball of the 19th over was horrifically bad for me, given my experience and how many games I’ve played,” said the Irishman.

From there, England needed seven from the final over and after Lungi Ngidi had Tom Curran caught at deep mid-wicket, Moeen Ali was bowled, leaving Adil Rashid to get three from the only ball he faced, the last ball of the match.

He was run out coming back for a second that would have forced a super over, leaving England with their first one-run defeat in a T20 international.

“I know recently we’ve played in a lot of tight games, but we want to play in as many of these as we can because we want guys exposed to as much pressure as they can be,” Morgan added.

“You cannot replicate the pressure you’d have in the World Cup, but in situations like that we have to find a way to get over the line.”

Morgan also defended the omission of batsman Dawid Malan, who made a century in his last T20 international in New Zealand in November, likening it to the time Jonny Bairstow spent time out of the one-day team before forcing his way into the World Cup-winning side.

“Malan is an exceptional player and given the success of the white-ball team over a short period of time, he’s a bit of a victim of that,” said Morgan.

“Dawid has done absolutely everything he needs to do to be in the squad. He just needs to wait for an opportunity and hopefully take that.

“There is extreme competition for places and for captain, coach, the whole team, it’s a very healthy sign.”

Australia-New Zealand ODI to be played in closed SCG