England’s door is set to remain firmly closed to Alex Hales even though he became the leading runscorer in this year’s Big Bash in Australia on Friday after blasting 110 off 56 balls for Sydney Thunder.

Hales has not played for England since being dramatically dropped from the triumphant World Cup squad when it was revealed he had kept secret from the team a second positive test for recreational drug use.

And white-ball captain Eoin Morgan has consistently said Hales has not yet regained his trust even though he has been a consistent runscorer ever since he was dropped in 2019 for Notts and in franchise competitions. 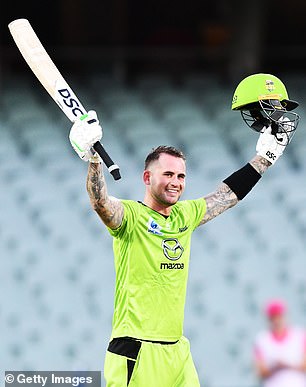 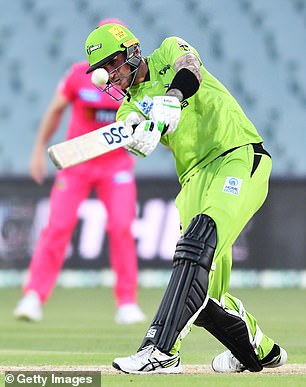 Hales future was addressed on Thursday by national selector Ed Smith when asked if the opener might be available for Twenty20 leg of England’s tour of India in March.

‘At the moment I would expect things to stay as they are,’ said Smith. ‘No doors are closed in terms of a final decision and it’s not that it’s going to be the same indefinitely. But, if I were to make a prediction, I’d say we will stay as we are.’

Clearly it will be difficult for Hales to return while Morgan is captain and his hopes of coming back in time for this year’s World Twenty20 in India are remote, however many runs he gets. But Smith insisted the decision was a collective one.

‘I would say every captain is very important in all selections and that goes for Joe Root too,’ added Smith. ‘But selectors take responsibility for squads working closely with all the coaches and especially the captain. So I would say that’s an unfair inference (that Hales will not play while Morgan is in charge). We all work together.’