England are set to make the shock decision to select Mark Wood over Jofra Archer for the third Test against South Africa, starting on Thursday.

England want extra pace on the traditionally slow St George's Park pitch, and while Archer has been showing something of his form of last summer in the nets, Wood has been replicating a human catapult in doing everything asked of him and more. And that has propelled the Durham fast bowler, who turned 30 last week, ahead of Archer in the race to replace the injured James Anderson in the side. 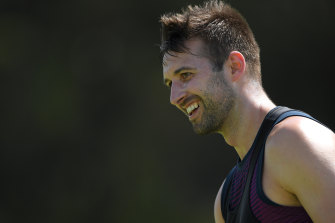 England are set to pick Mark Wood ahead of Jofra Archer for the third Test against South Africa.Credit:Getty Images

The likely selection will be a blow to Archer, who has struggled this winter after an electrifying start to his England Test career in last summer's Ashes. The 24-year-old took two for 207 in two Tests against New Zealand and, although he took six wickets in the opening Test against South Africa at Centurion, they were expensive and also came at the cost of an injured right elbow, which ruled him out of the win in Cape Town.

Archer has now recovered, but Wood's extra pace when bowling at top speed – he clocked 152 kilometres per hour during the World Cup – will counter that of Anrich Nortje, the fastest bowler in this series to date, whose hometown is Port Elizabeth.

Indeed Steve Harmison, the former Durham and England fast bowler who is Wood's mentor and comes from the same village of Ashington, said Wood was "always pencilled in to play the PE Test because of his reverse swing" during a Q&A session with Telegraph readers during the second Test in Cape Town.

Wood has not played a competitive game since the World Cup final, when he limped off after a hostile 10-over spell, but has built up his speed and stamina in South Africa over the past month.

England's coaching staff are understood to have been highly impressed by Wood's attitude, particularly in the past two net sessions at St George's Park. 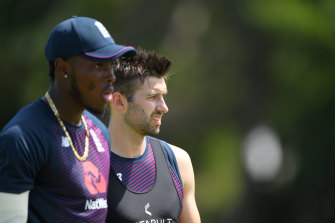 Archer had a brilliant debut but has failed to reach the same heights since last year’s Ashes series.Credit:Getty Images

According to Paul Collingwood, England's assistant coach, the management team have tried to find Wood a game to play in on this tour, but it has not been possible.

"Ideally, you'd love Woody to go out and get some competitive games in," Collingwood said. "But I've got no qualms he could come in this week and be successful because of what he's done in the past [36 wickets at 37 runs each in 13 Tests], what he can draw upon. He's got the skills to go out there and make an impact."

Chris Woakes is another pace bowler in contention for Anderson's place, and is the closest to a like-for-like replacement as an outswing bowler, but local conditions are working against him.

Port Elizabeth is known as the "Windy City", and St George's Park is exposed to sea breezes at the top of a hill only a mile from the Indian Ocean. As the wind blew when England practised in the nets adjoining the ground yesterday, it would have favoured Sam Curran's inswinger from the pavilion end and Stuart Broad's outswinger from what is known as the Duck Pond End.

If these conditions applied in the Test, Curran, as a left-arm swing bowler, is suited to bowl opposite Broad – with Wood as third seamer from either end.

When Ben Stokes bowled his knockout final spell on the last afternoon at Cape Town, he also made the ball reverse swing, so it makes sense for England to increase their firepower in a department where they have so far surpassed South Africa.

Collingwood took what is becoming the England party line on Archer when a slow pitch is coming up, which happened in both Tests in New Zealand.

"He's very early on in his international career. He hasn't bowled a lot with the Kookaburra ball, which requires a completely different skill set to the Dukes ball," he said.

"His main skill is bowling [145-plus km/h]. We have enough bowlers in and around the county circuit who can bowl [slower] and try to nip it around. You want the likes of Wood and Archer to give you that X-factor, and that's what we're looking for."

In the two net sessions here, it has been Wood exhibiting that X-factor. While there is a case for playing both Wood and Archer, to exploit the increasingly low bounce for which the ground is renowned, England appear to be thinking of retaining a spinner, probably Dom Bess if only because he has played more recently than Jack Leach, who has been so ill that his last game was the Mount Maunganui Test in mid-November.

"I think if you look at the data, then spin tends to play a bit more of a part here than the other grounds," Collingwood said. "We'll gauge it."

Collingwood also gave a public approval to Dom Sibley for his unbeaten 133, albeit in a roundabout way. "I'm delighted for the youngsters last week. For Sibbers to come in and do what he did, it was great to see how someone's mentality can overcome technical deficiencies. I don't mean that in a bad way, but the mind can be very powerful at times and make you succeed."

As someone who shovelled straight balls through midwicket with a more dominant bottom hand than most, he should know.

Captain Joe Root practised as normal with the team , after being kept away from training on Sunday in case he was infectious with the flu-like bug that plagued England in the first Test.