Australian white-ball skipper Aaron Finch says it is "not ideal" to have two Australian sides playing at once but it inadvertently could help his team prepare for this year's Twenty20 World Cup in India.

The need for all nations to help each other through the COVID-19-induced financial troubles meant Cricket Australia agreed to have two teams concurrently on the go next month – one for the five-match, Twenty20 series in New Zealand, the other for the three Tests in South Africa.

However, the trip to the African nation has yet to have its dates released or any official confirmation, with Cricket Australia still working through the strict bio-secure protocols Cricket South Africa has planned. CA's intention is for the tour to go ahead but it could yet to be shifted, perhaps to Perth. 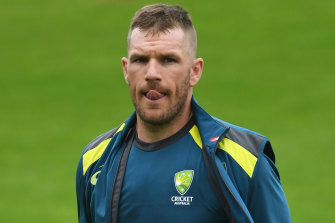 The likely absence from the white-ball tour of three-format players including Steve Smith, David Warner, Pat Cummins and Mitchell Starc will mean others get the chance to impress ahead of October's showpiece event.

"It's an exciting time for Australian cricket. It's probably not ideal having two Australian teams playing at the same time but it's going to give us a lot of information going forward as well," Finch said.

While England abruptly quit their tour of South Africa late last year because of bio-security issues, Sri Lanka recently completed their tour, heightening hopes Australia will return for the first time since the ball-tampering scandal of 2018.

However, Warner said on the eve of this summer that hub life could eventually become too much for players, and with several now having endured tight regulations for six months, there could be a tipping point in what shapes as another testing year. While commenting on Tim Paine's behaviour during the Sydney Test, Australian Cricketers' Association chairman Greg Dyer said the Australian and Indian players were "managing high levels of bubble fatigue".

Finch, who is also an ACA director, said he didn't know if there were any players considering, while unlikely, the option of pulling out of a month-long South African tour in favour of the short New Zealand trip where bio-secure restrictions are likely to be less onerous.

Upon arriving in New Zealand, the squad will have 14 days of managed isolation, including not being able to train for the first three days. Provided there are no positive COVID-19 tests, they will then be given an exemption to train for the next 11 days. Once that fortnight is over, they will not need to live in a bubble.

Cummins, Smith and Josh Hazlewood are among those who began life in a hub in August ahead of the white-ball tour of England, while Warner had an unexpected break because of his groin injury. Starc did not partake in the Indian Premier League, giving him time at home on the eve of the summer.

The Test stars will have the opportunity of a short break after the fourth and final Test against India ends this week. The first of the T20 matches against the Black Caps is in Christchurch on February 22.

"There has been a lot of waiting for the Test series to be over and then there will be a chance to … name both squads and then we will be able to move forward and start planning that out a bit better," Finch said.