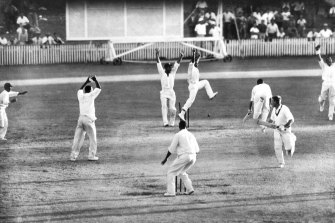 Australia’s Ian Meckiff is run out as West Indian Joe Solomon (extreme left) hurls the ball and breaks the wicket. The game ends in a tie.Credit:Ron Lovitt

In one of the most electrifying finishes on record, Australia and the West Indies created Test cricket history when they tied in the first Test match at Brisbane.

The Australians seemed in an impregnable position ten minutes before stumps when they needed only seven runs to win.

At that time captain Richie Benaud and fast bowler Alan Davidson were together in a sixth-wicket partnership which had fielded 134 runs.

Then disaster struck. Starting with the dismissal of Davidson, four wickets fell In 13 balls.

Davidson, Wally Grout and Ian Meckiff were all run out.

At the start of the last over, Grout and Renaud were together. Australia needed only five runs and two batsmen were to come. 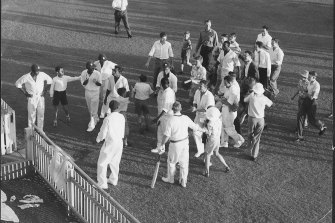 Players move to the gate leading to the dressing pavilion after the Tied Test at the Gabba. Credit:R K Lovitt

One run came from the first ball. It seemed a good position and better still when Benaud raced through to take the strike.

One clean and powerful hit to the boundary would win it and Benaud knew there were seven more balls to be bowled. Then Benaud was out.

Charging down at Benaud Wesley Hall banged a bumper outside the off-stump and Benaud, swinging wildly, touched it and was caught behind Alexander,

Grout should have been caught off the fifth ball, but West Indies fast bowler Hall dropped the catch.

The sixth ball Meckiff thrashed toward the boundary. Two runs came to tie the score, but when attempting what would have been the third and winning run. Grout was run out.

In a tension situation Kline came to the wicket and deflected the seventh ball to square-leg. Meckiff raced down the pitch, but was out of his ground when a return from Solomon shattered the stumps and the end came with each tide scoring 737 runs.

Sir Donald Bradman, chairman of the Australian Board of Control, described the game as "the greatest and most exciting of all time."

Victorian and Australian selector Jack Ryder said: "It was tremendous. We will never see another Test match like it."

Rival captains Richie Benaud and Frank Worrell each declared it the most exciting match in which they had ever played.

Benaud said: "I have never known a Test like it. When we needed 40 runs in about even time I thought neither side deserved to lose."

It was fitting that such a result should be the end, as it could not be said that either side deserved the game one bit more than the other.

Each in turn had played good and bad cricket, and it would be easy to point out mistakes that had proved costly.

But that is cricket, and it is mistakes and recoveries that help to make Test matches, such as the Brisbane one, so exciting.

Bayliss feared another tragedy when Smith was struck by Archer