‘I’ve always played it down but at the time there was a little bit of panic going on’: Gareth Batty recalls ordeal at sea 15 years ago in Galle which almost scuppered England chances

England may be cursing the Sri Lankan rain that has plagued this tour and looks sure to interrupt Tuesday’s first Test but Gareth Batty has a different reason for bemoaning water in Galle. He almost drowned in the sea here.

It was 15 years ago that Batty, then making his way in Michael Vaughan’s England team as an off-spinning all-rounder, went for a swim with his captain and team-mate Matthew Hoggard outside their hotel.

‘I’ve always played it down but at the time there was a little bit of panic going on, that’s for sure,’ said Batty, back in Galle as a summariser for talkSport’s excellent radio coverage. ‘Even Hoggy, a good swimmer who ultimately got us help, said afterwards “we got away with one there”. 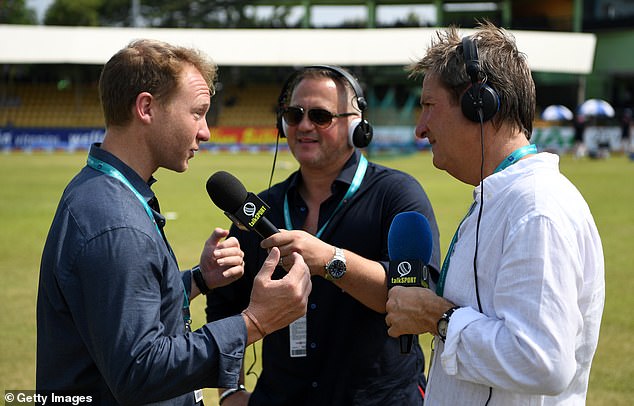 ‘It was where you swim between the flags at the Lighthouse Hotel here and there were decent waves so we were body surfing. Before we knew it we’d been dragged outside the flags and pushed into this coral. There was no chance of your feet touching the bottom. The water was whacking us at nose height.’

Not that Batty was thinking the worst as waves threatened to engulf him. ‘The only thing crossing my mind the whole time it was happening was “I’ve a chance of playing and I don’t want to jeopardise that”,’ he told Sportsmail.

‘I was caught in the rip and it was pushing me up against the coral and I was thinking ‘this might be my one and only chance of playing on this tour’.

‘A wave pulled Vaughany out of the sea onto the rocks and he said “I won’t leave you.” I remember thinking “I bet you will if they rescue you first.” The other boys on the beach were heckling us not realising we were struggling.

‘I’ve still got little scars on my hands from bashing up against the coral but in a funny way it turned out to be a pretty good week apart from nearly drowning. I did end up playing in that Test and there were periods where we scared Sri Lanka, who were a wonderful team then. We ended up battling for a draw. In the spin conditions and with the attack they had we were pleased with that.’

The story is told engagingly by one of county cricket’s most experienced figures who is coming to the end of a playing career which brought him nine Tests, two of them at the age of 39 only two years ago after an 11 year gap. 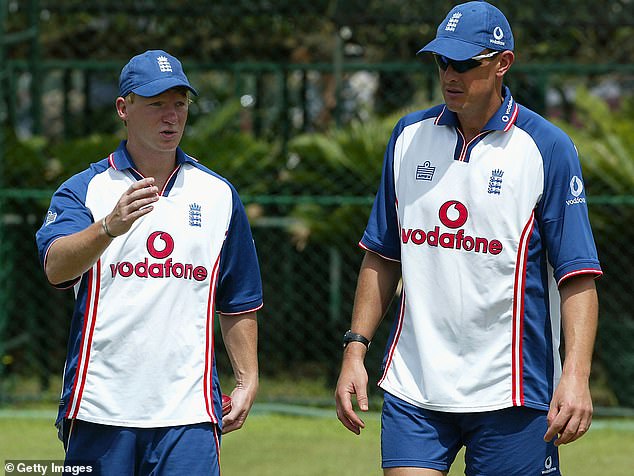 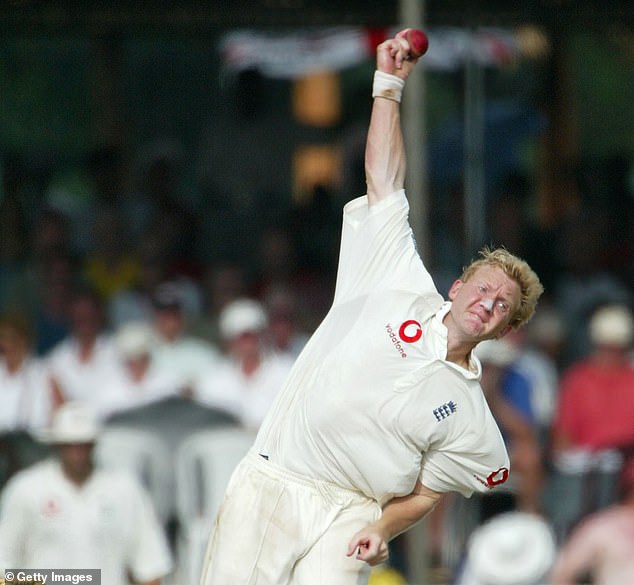 ‘The whole experience was amazing,’ said Batty of making an unlikely comeback against Bangladesh and India. ‘When you’re young you don’t fully remember things and I couldn’t talk you through the emotion of my debut.

‘But I can recall every single moment of every day of the two Tests I played that winter. For an old man who genuinely loves the game it was a wonderful send-off to international cricket.’

He has not quite said goodbye to playing for Surrey, having just signed another year’s extension to his contract at 41 as a player coach, but the former captain was conspicuous by his absence when his county clinched the championship in some style at Worcester last summer.

Batty, having handed over the Surrey captaincy to Rory Burns at the end of 2017, was otherwise engaged playing for the second team against Nottinghamshire when the big moment came.

‘Alec Stewart (the Surrey director of cricket who Batty believes would make an ideal replacement for Andrew Strauss for England) rang me and said “get yourself down here” but I said “I’m not leaving the boys, no way. I’m doing my job.” We were in the process of beating Notts. I hadn’t played in the championship last season and I’m not one to hang on other people’s coat tails. 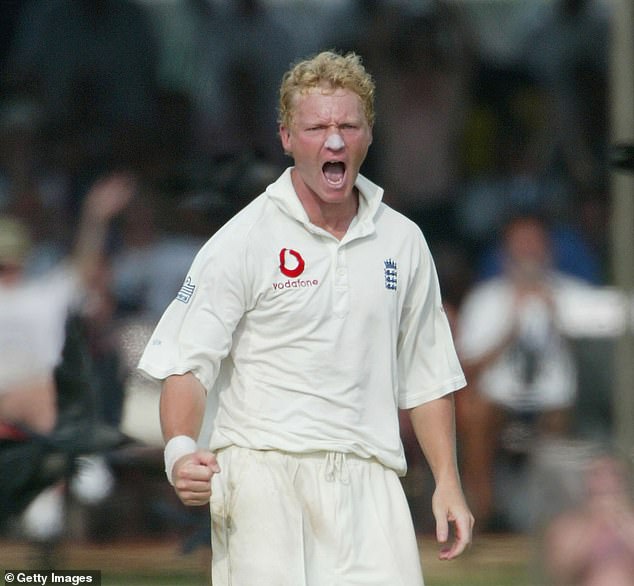 ‘I was really pleased and immensely proud when we won the title because we had come through some tough times at Surrey but I just had a little moment on my own with a glass of wine that night. It was like “yep, we got there.”

‘A couple of the guys rang me and I said “you just enjoy the moment”. I enjoyed the moment when we got over the line in that game against Notts.

‘Luckily the club and Stewie still want me around playing and coaching and doing whatever else I can do to help and that’s enough for me. Stick a broom up my backside if you like and I’ll clean the changing room, it’s not a problem.’

Now he is enjoying watching Oval team-mates Burns, Sam Curran, Ben Foakes and Ollie Pope in this England squad in his radio role with paternal pride.

‘It’s that old man’s glow you get inside you. It’s not like watching your own children, of course, but it’s not a million miles away,’ said Batty.

‘It’s a pretty cool thing to see the boys walk out in an England shirt when you know what they’ve been though and how hard they’ve worked. I’m nervous and excited for them all at the same time.

‘I must admit I was surprised how well Sam did last summer. Everybody knew his talent but we were protecting him and looking after him whereas England just threw him into it and he flourished. Maybe I should have exposed him earlier. He has a twinkle in his eye and a cheekiness that puts a little smile on my face whenever I see him out there.’ 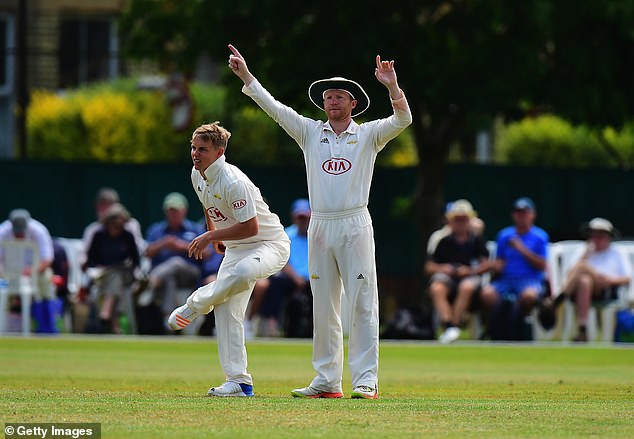 That pride will be evident when Batty plays his part in talkSport’s commentary over the next three weeks, having made a huge impression on producers and listeners alike in his first major broadcasting role.

‘It was an opportunity that came along and Stewie said “it’s not a problem, just keep in some sort of shape”,’ said Batty. ‘I was a little bit apprehensive about being a poacher turned gamekeeper, with me still playing and coaching, but I’m very aware I’m here to do a job.

‘I don’t want to be bagging players but if someone doesn’t get something right I will acknowledge that. I’m thoroughly enjoying it with a brilliant bunch and I’m learning loads from old hands like Mark Nicholas and particularly Neil Manthorp. I’ve been in awe watching how they operate.’

But he has not been allowed to forget the headlines he made the last time he was with England in Galle. ‘I’ve copped a bit of stick, definitely,’ smiled Batty. ‘Wherever I’ve gone anyone who was around at the time has said “you’d better not get in the sea.” A few people around the hotel have mentioned it but it’s all good. I did actually go into the sea with my daughter on a nice quiet part of the beach and turtles were swimming around us. It was lovely. But there was no body surfing. My little one made sure I was kept in check….’

BUMBLE ON THE TEST: I knew there would be a late fifth Test twist