Before the gates open to the SCG at 7.30am on the first day of the Sydney Test, the last action performed by self-described “ticket bitch” Margo Carson is to step out of the way.

The members of the SCG have been lining up since 3am, when Matt Carrigan of Thornleigh scythed through the darkness to claim line honours for the first time, followed by a steady dribble of diehard cricket fans from all parts of the city and beyond. They swap stories about the year gone. Some members have died since the tribe last gathered. Some have married. Some are bringing their children for the first time. 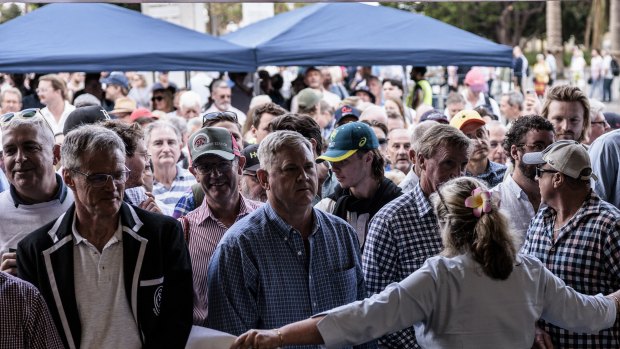 Margo Carson holds back the crowd on the opening day of the Sydney Test.Credit:Brook Mitchell

About 80 members are gathered as the sun rises, and they begin to come in greater numbers until the queue snakes past Kippax Lake and all the way to Moore Park Road.

In the public stands of the SCG, seating is reserved, but most of the members’ seating is unreserved and allocated on a first-come, first-served basis. None of the seats are bad, but some are indubitably better than others.

At 7am, security guards start checking bags and removing barriers, so the front group moves right up to the gates.

By 7.25 they are quivering like racehorses. The roller door is unfurled. There are now only two things standing between the members at the front of the queue and their favourite seats: Margo Carson and a sense of decorum. 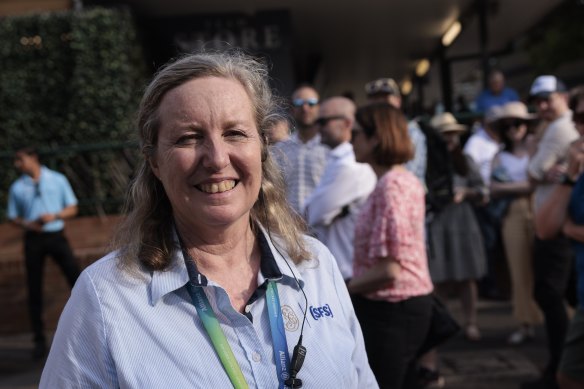 Carson worked her way up to be the team leader at Gate A after joining the SCG six years ago. She has learnt a thing or two about crowd management. She knows every crowd is different and they vary between sporting codes and between gates at the same event. She knows when to jest and when to crack down. She knows that people respond better when they know what to expect. And she has this group’s measure.

“You’re not allowed to enter the grounds until the gates open fully, so no trying to get under the gate,” she says. The crowd guffaws. They would never slip under a gate, and they know Carson knows that too. She warns them not to run, or they will be for it.

“I’m small but I’m tough and I kick hard.” They chuckle. They are naughty schoolchildren and she is their principal, with two fake frangipanis in her hair. The clock is ticking down.

“Now let me run out of the way before you proceed,” she says. They chuckle again. Nobody is allowed to run. Carson corrects herself. “I will just move slowly out of your way …” They are really laughing now.

She moves aside. The gates open, and the people sluice through – fast-walking, jogging, half-running and real running, though with a backward glance to check whether Carson is watching.

There goes Carrigan, who will find his favourite seat in a room at the top of the Members Stand, with a window through to the action and a ledge to place his beer.

There goes Martin Tighe, who came down yesterday from Parkes, and opted to wait in line from 4am rather than pay $25 to get a reserved seat. He pays enough for his membership anyway. This Test is his annual treat. 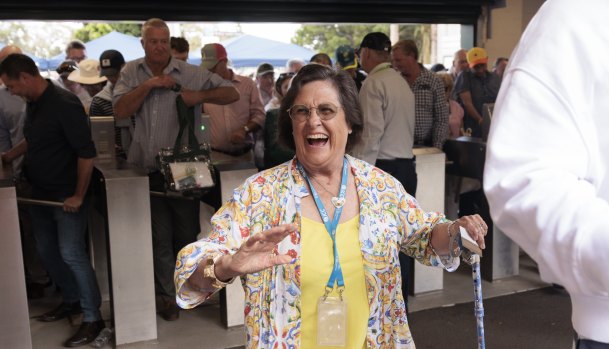 Penny Morris bursts through the gates of the SCG on the opening day of the Test.Credit:Brook Mitchell

There goes Penny Morris, who learnt to enjoy cricket 30 years ago when she fell in love with a man who was passionate about the game. In 2000, she taught herself the rules with a small book called Granny’s Book for Cricket and tried to impress her partner with her knowledge of the positions, little knowing that when the batter was left-handed, the offside fieldsmen were onside and the onside fieldsmen were offside.

And there is Carson, who has been up since 4am and has eaten only a lamington at the morning briefing. She is helping to open the gate for wheelchairs, she is responding to queries about whether a new seat sticker can be obtained for somebody whose sticker would not stick to their dirty seat, she is dealing with a scanning issue on a separate gate.

Rain will interrupt play and the fans will be subdued on this dead rubber Test, though a reasonably sized crowd of about 30,000 will attend. They include nine-year-old Oliver Morrison, who is possibly Steve Smith’s biggest fan. 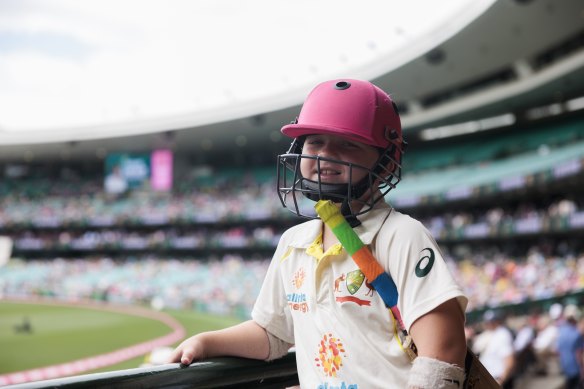 The next Steve Smith? Oliver Morrison dressed for the occasion at the SCG on Wednesday.Credit:Brook Mitchell

Oliver’s father, Jason, says Smith appears to be aware of the adulation. Sometimes he catches Oliver’s eyes in the stand while he is waiting to bat, and gives him a nod of recognition.

But back at the start of the day, before the gates open, in this moment there is nothing but excitement for what lies ahead.

“I’m just me,” Carson says. “I’m as mad as a hatter. As long as I’m keeping them informed and keeping it light-hearted, everyone is well-behaved, so it’s fun.”

England in South Africa: Eoin Morgan says his team have ‘lessons to learn’

‘He’s at you all the time’: Hazlewood biggest threat to India, says Gavaskar