India's quicks have been challenged to bounce Steve Smith at their peril, as Australia's top-order stars brace for a bumper barrage to blunt their scoring power.

Australia head into the start of the international men's season on Friday with two of their top-order linchpins, Smith and Aaron Finch, in a form trough after underwhelming campaigns in the Indian Premier League. 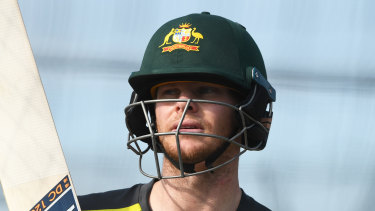 Andrew McDonald, a senior assistant in Justin Langer's coaching staff, does not believe the short ball will work on Smith, citing as evidence his scores of 98 and 131 during last year's ODI series in India, and his match-winning (and Ashes-retaining) performance at Old Trafford.

McDonald, Smith's senior coach at the Rajasthan Royals, is in quarantine with Australia's IPL stars overseeing their preparation for the suite of ODI and T20 matches preceding the Tests.

"I don't think it's a weakness, is it? They're taking a shot at that area to get him out early and then what you'll see after that initial potential plan they will go to a more standard try and negate the runs [plan]," McDonald said.

"I think they've used it before and he's done well on it before. I'm suggesting that plan hasn't necessarily worked to its full effect.

"I know with the Test match he had that moment with Archer where it got him. In terms of coming back off that he was able to score runs.

In Test cricket, Smith has the luxury of not attacking the short ball but that is not the case in the limited-overs formats.

"For me it's going to be a tactic a lot of bowling units will use against our top-line batters, especially with four men out in one-day cricket it seems an obvious way to defend a bit better," McDonald said.

"We saw it with the one-day plans to him the last time we went to India as well. They had a clear plan early on in the innings where they had a leg gully, a deep square and a deep man in front of square."

McDonald said Finch has been tinkering his technique at training during the quarantine period after a run of outs cost him his place at the Virat Kohli-led Royal Challengers Bangalore. The franchise had paid $900,000 for his services.

"I think these two weeks for players who haven't had the IPLs they wanted to have, it gives them a little bit of time to breathe, go back and work on the key focus points in a training environment where there's not as much pressure and stress," McDonald said.

"I think he's making some good gains there and he'll be right for the 27th."