At last a Twenty20 international won by the team batting first but how close England came to upsetting India and pulling off a dramatic last-gasp victory.

Instead India just about bucked the trend in this series to scramble over the line in this fourth game and set up a decider on Saturday in what could easily be a dress rehearsal for the World Cup final in Ahmedabad later this year.

It may have taken four hours and 17 minutes for India to complete this eight-run win and square the series but few who watched it play out at an empty Narendra Modi Stadium from afar would have complained about the desperately slow over-rate. 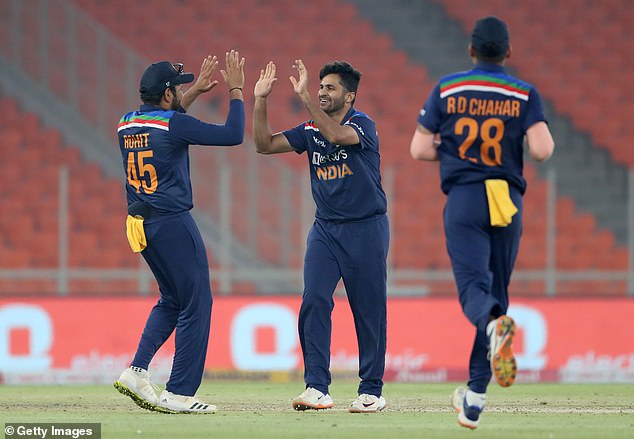 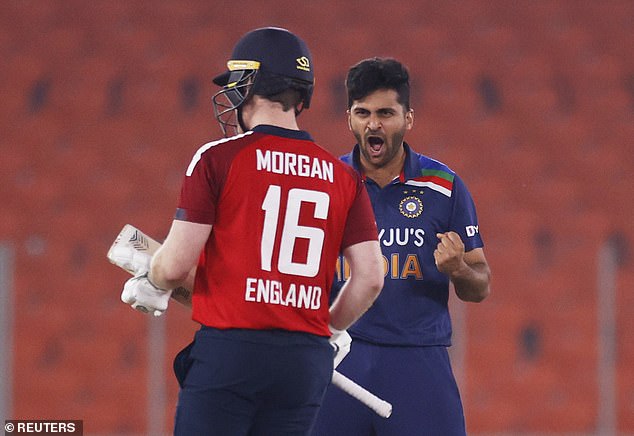 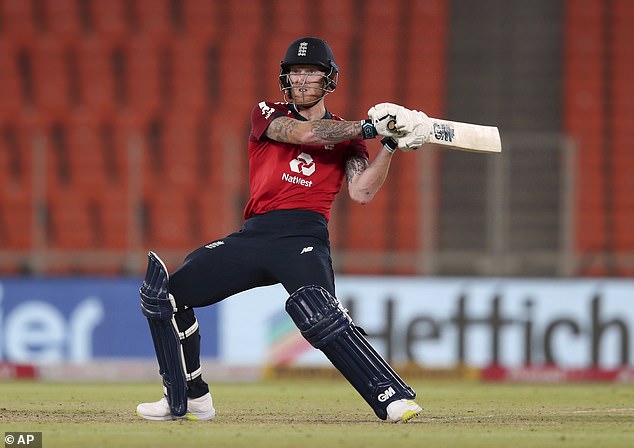 When Jofra Archer smashed Shardul Thakur for four and then six in a final over England began needing 23 to win and then saw the bowler follow up with two wides it really did look as though they would somehow pull off a series-clinching win.

But, with a hobbling India captain Virat Kohli watching anxiously from the sidelines, Thakur regained his composure and conceded just one run from his final three balls and took the wicket of Chris Jordan.

In truth India deserved it after unleashing yet another of their exciting IPL inspired talents in Suryakumar Yadav on England and seeing him smash 57 off 31 balls in a total of 185 for eight that challenged the accepted batting second logic in night matches in India.

It still looked as though England’s chasing expertise would again prove decisive when Ben Stokes added 65 off 36 balls with Jonny Bairstow. But when both were dismissed in successive balls by Thakur to leave England needing 46 off 22 the game was almost up. 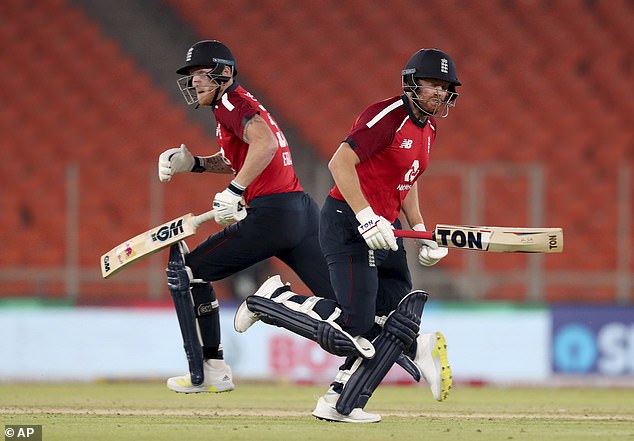 ‘One of us had to be there at the end,’ said Stokes after falling one run short of his best T20 score on 46. ‘In an ideal world we’d have loved to go into the next game having won the series but the next game is a final now and that’s great for us as a team.’

From the moment Rohit Sharma struck the first ball of the match from Adil Rashid for six it was clear this was a much better Ahmedabad pitch even though it had already been used for the first match of the series.

No-one used the conditions better than Yadav who made his India debut in the second T20 international without batting and now made his introduction on the highest stage in the most extraordinary fashion.

Only New Zealand’s Mark Craig and Pakistan’s Sohail Tanvir had hit a six off their first ball in international cricket before but here Yadav pulled Archer with a Caribbean-type elan high into the empty stands. No chance of having a look before hitting out these days. 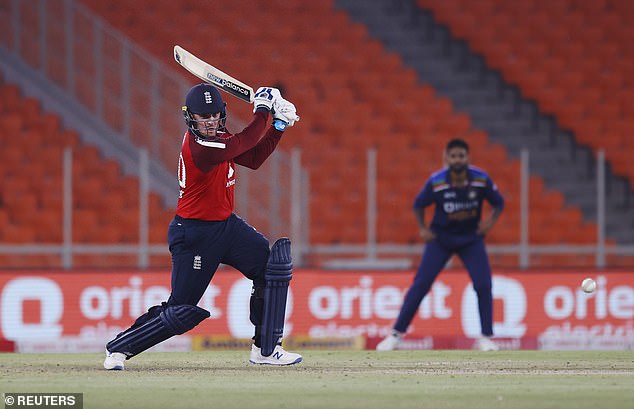 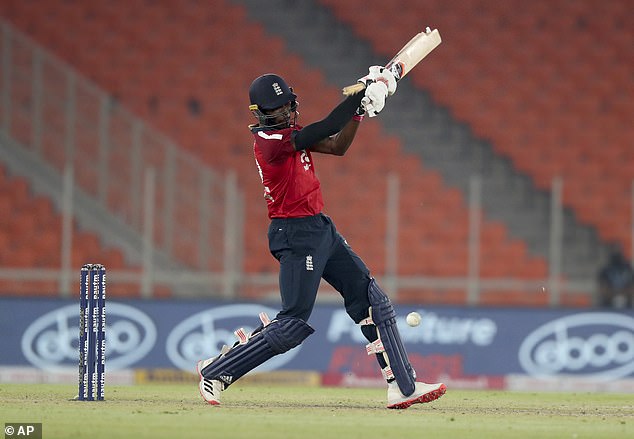 It was a typical piece of audacity from the latest of the seemingly endless supply of exciting talents on the India production line, Yadav racing to a stylish 50 off 28 balls.

But his innings ended in controversial fashion when Sam Curran was introduced for the 14th over. His first ball disappeared over fine leg swept for six but his second, from the same Yadav shot, found the newly positioned Dawid Malan running in.

It looked a clean catch at full pace but Malan tumbled forward as he grasped the ball, leading on-field umpire Nitin Menon to call on his TV colleague for confirmation and, crucially, giving his soft signal as out.

Four minutes worth of camera angles proved inconclusive for TV umpire Virender Sharma so he had little option but to confirm the on-field guidance. And, as the camera so often lies with these foreshortened images, it looked the correct decision too. 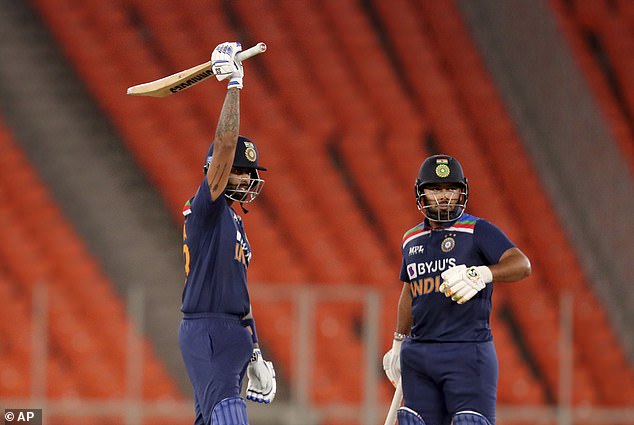 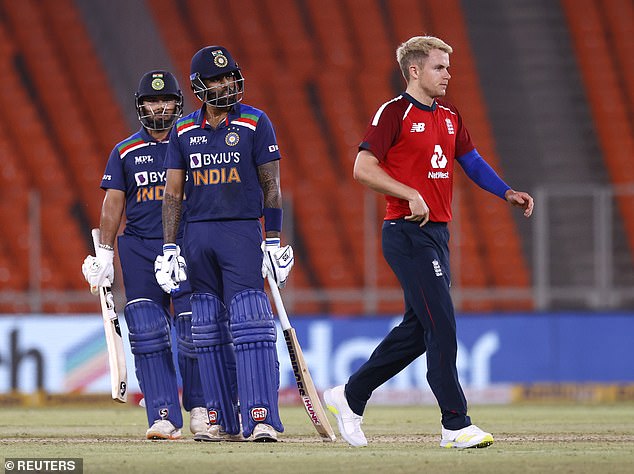 Not that Kohli, who expects to be fit for Saturday, agreed. ‘If the fielder doesn’t know if the catch is clean I’m not sure how the square-leg umpire does,’ said the India captain. ‘We should look at the soft signal because these things can change games.’

TV umpire Sharma was again in action in the last over when Washington Sundar was caught on the boundary by Curran but his foot came perilously close to the boundary marker. Again the soft signal was out, again Sharma did not have enough evidence to overturn and again the decision was almost certainly right.

Archer, with four wickets, and the consistently rapid Mark Wood were again superb for England in the face of some dazzling strokeplay from Yadav and two other of India’s dynamic young guns in Rishabh Pant and Shreyas Iyer. 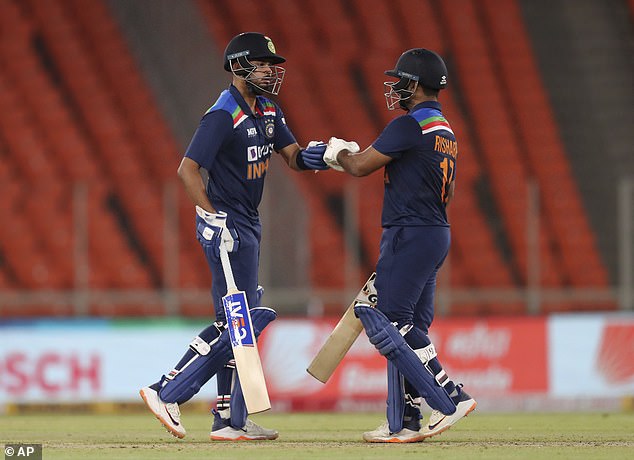 But it was not enough, with wickets falling too regularly for England’s comfort once Jason Roy had launched their reply with his third score in the 40s in this series.

‘There was a lot more dew throughout the game and the conditions were different to any other match in the series,’ said England captain Eoin Morgan. ‘The game ebbed and flowed but we were in control for a lot of it. We just left ourselves too much to do at the end against a top quality side.’

At least now England have a chance to prove their mettle under the pressure of a sudden death decider back at the probable venue for October’s World Cup final. It is a fitting end to this series between the best two T20 sides in the world. 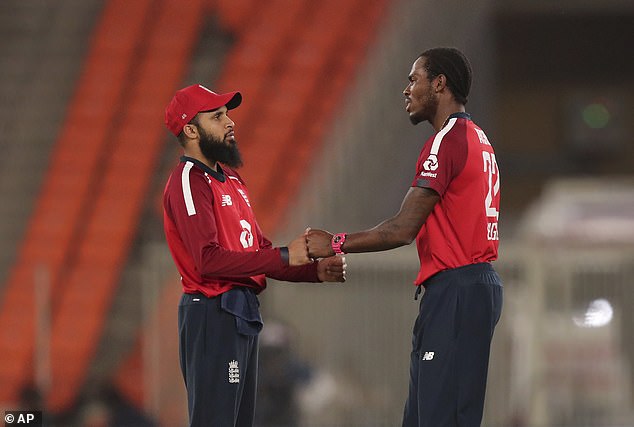 Jofra Archer (right) excelled with the ball once more though, taking four wickets on the night