Virat Kohli is facing a suspension following his angry exchange with umpire Nitin Menon on the third evening of the second Test in Chennai.

India captain Kohli reviewed a not-out decision against Joe Root in the final over of the day and reacted furiously when his opposite number was reprieved on umpire’s call after lbw technology had been applied.

Sportsmail columnist David Lloyd, who used to sit on the ICC umpires’ committee, said: ‘He cannot be speaking to umpires like that and inciting the crowd. He should be setting a much better example. Someone in his camp should be having a word and the match referee should be very interested. It’s calculated and it’s not a good look.’ 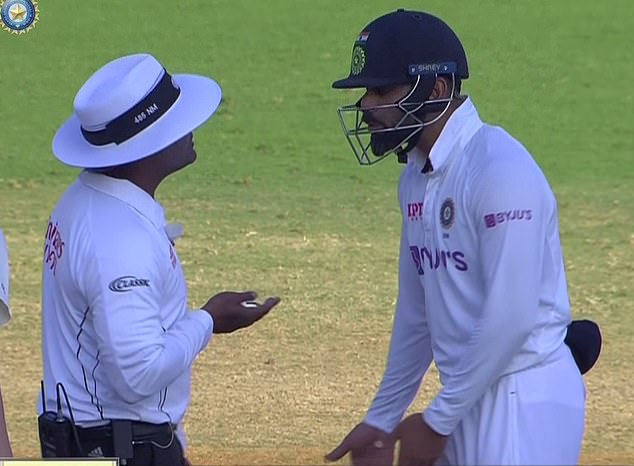 Ex-England captain Nasser Hussain added: ‘It was odd that the India team and their captain took the full 15 seconds to work out whether to review or not. They weren’t actually sure what they were reviewing for.

‘That tends to suggest there was a bit of doubt in their minds and yet Kohli seemed agitated by an umpire who had a milli-second to make that decision. If they were so certain that it was out and should have been given straight away, why did it take them so long?

‘Kohli pushes the line with umpires and officials. Joe Root went up and asked in a very smiley sort of way about a review earlier in the game, but Kohli is a lot more animated when he speaks to them — which doesn’t look good.’

Michael Vaughan, working for the BBC’s Test Match Social, said: ‘You can’t have this, I’m sorry. 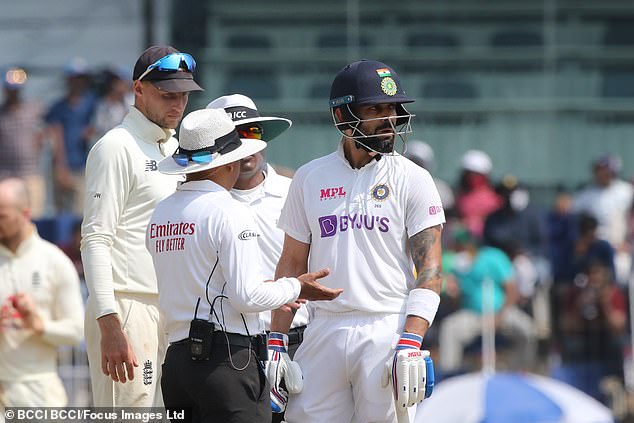 ‘Kohli is such a powerhouse, you can’t have him intimidating the umpire. It’s a stinker of a decision but you can’t be doing that as a captain.’

During the review — seconds before England closed on 53 for three chasing a notional victory target of 482 — ultra-edge confirmed the ball had missed the bat but struck pad on its way through to wicketkeeper Rishabh Pant.

When ball-tracking was then applied by third umpire Anil Chaudhary, it showed that the delivery from left-arm spinner Axar Patel would have gone on to hit the stumps but at the point of impact it was an ‘umpire’s call’ adjudication — meaning Root survived as Menon had judged in the batsman’s favour.

The histrionics could land Kohli in hot water with match referee Javagal Srinath. Under the ICC code of conduct, players face sanction if they show ‘dissent at an umpire’s decision’ or are seen to be ‘arguing or entering into a prolonged discussion with the umpire about his/her decision’.

The 32-year-old is now open to a Level 1 or Level 2 offence being brought against him, leading to an imposition of between one and four demerit points. 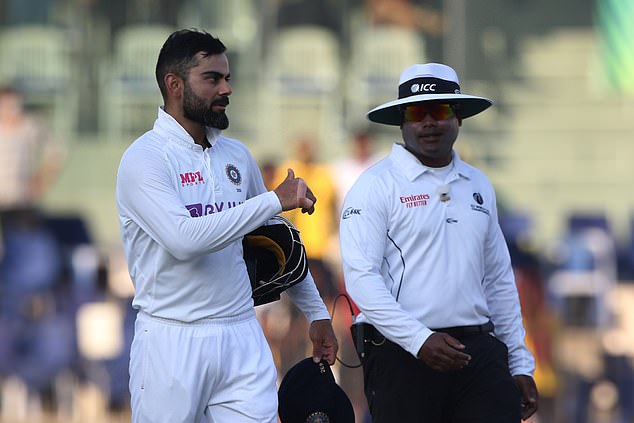 He currently carries two on his record from the past 24 months.

Were he to be found guilty of more excessive hostility in this match, a potential punishment of two further demerit points would take him to four and a suspension for one Test.

The ICC told Sportsmail on Monday night that Srinath was yet to inform their cricket department of any action, although match referees have 24 hours from when on-field incidents are brought to their attention to act.

Tim Paine will spend a second summer as Test captain. It could be his last