Virat Kohli reveals he suffered from depression during disastrous 2014 England tour, admitting he ‘felt like the loneliest guy in the world’ before advice from Sachin Tendulkar… and insists Michael Jordan expectation levels in India are a ‘privilege’

India captain Virat Kohli has revealed he suffered from depression on his nightmare tour of England in the summer of 2014.

The 32-year-old managed just 134 runs in the five-match Test series, with a highest score of just 39 and six single-digit scores in 10 innings.

The India star averaged just 13.40 in the series as his side suffered a 3-1 defeat, and despite bouncing back to become one of the distinguished batsmen in the game over the next few years, Kohli has revealed his poor run affected him off the field. 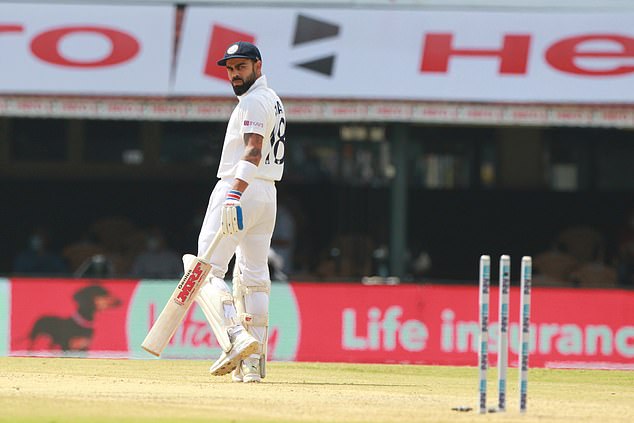 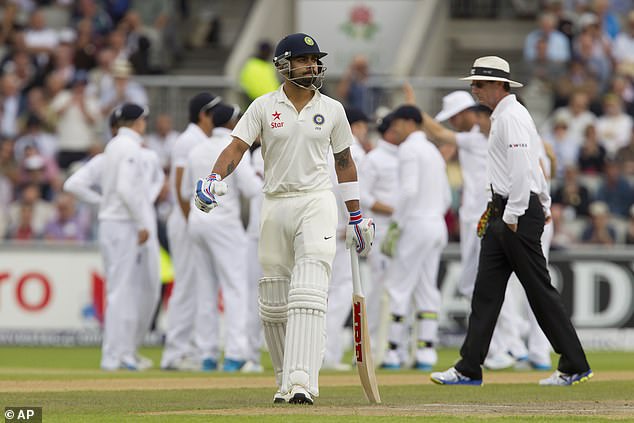 He managed just 134 runs in the five-match Test series, with a highest score of just 39

Speaking to Mark Nicholas in the first episode of his new podcast Not Just Cricket, Kohli said that he ‘felt like the loneliest guy in the world’ on the tour and that he was ‘going further down each day’.

Asked if he suffered from depression during the tour, Kohli replied: ‘I did. It’s not a great feeling when you wake up knowing that you won’t be able to score any runs, and I think all batsmen have felt that at some stage or the other, where you’re not in control of anything at all.

‘I just couldn’t understand at all how to get over it. I think that when you look back at a very difficult phase, you realise that you had to go through that phase fully to be able to understand what’s wrong and rectify it and move forward, and just open yourself up for change, accept that there are things that are going wrong.

‘But that was a phase where I literally couldn’t do anything to overturn what I was going through and it was tough. 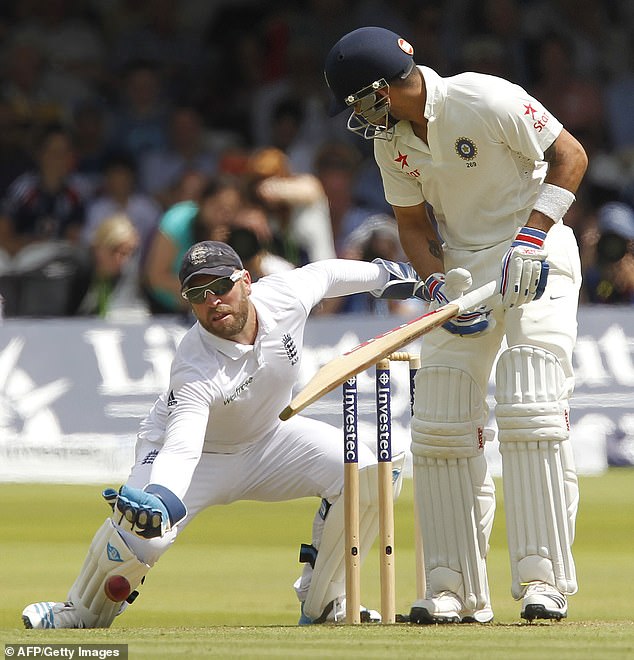 Kohli averaged just 13.40 in the series but said he felt incredibly lonely during the tour

‘I felt like I was the loneliest guy in the world. And that’s what happens, you can really push yourself into a downward spiral, where you feel like you’re going further down with each day that passes.’

Kohli bounced back by scoring 692 runs on India’s following tour of Australia, a series which saw him score four hundreds including two centuries in the opening Test match at Adelaide.

Speaking to BCCI.tv last year, Kohli revealed that he picked the brains of former batsman Sachin Tendulkar to bring about a few technical adjustments in his game ahead of the tour Down Under.

Tendulkar explained to him how he felt his hip position wasn’t correct and therefore made him vulnerable to the swinging ball, and his advice appeared to work wonders on the field. 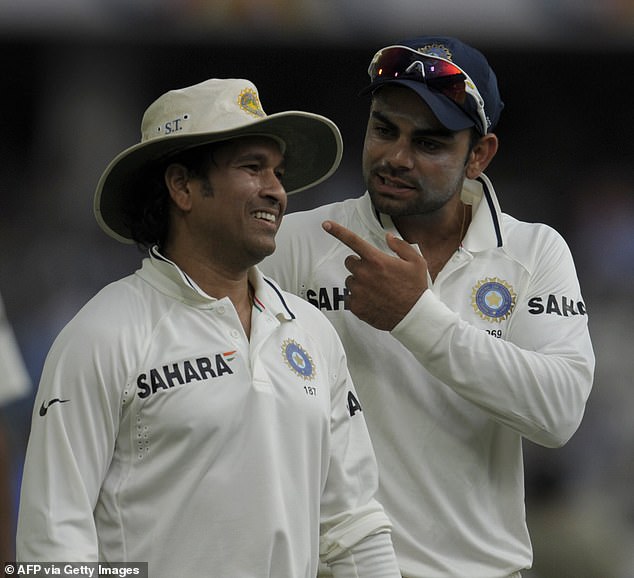 But Kohli has now insisted the India legend’s advice went beyond technique and also touched on the mental side of the game, telling him to resist fighting the negative feeling within him.

‘I did have a chat to Sachin about the mental side off things as well, and the thing he told me was in cricket what he experiences was, if you’re going through a strong negative feeling, if that’s coming into your system regularly, it’s best to let it pass,’ Kohli continued.

‘If you start fighting that feeling, it grows stronger. So that’s the advice that I took on board, and my mindset really opened up from then on.’

The 32-year-old is now one of the game’s most decorated figures, having scored more than 22,000 international runs and 70 hundreds on the global stage. 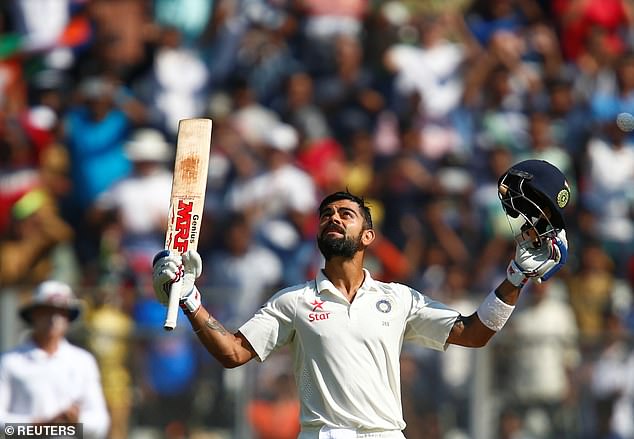 Kohli has gone on to become a distinguished batsman, scoring more than 22,000 runs

The expectation with the bat also increased as he gradually took over the captaincy from MS Dhoni across all formats in the second half of the previous decade, and the burden placed upon him now in India appears comparable to that which basketball legend Michael Jordan faced during the six-time NBA winner’s heyday at Chicago Bulls and with the USA national team.

But Kohli insists it is an honour and a privilege to have that pressure placed on him in his homeland, and that the challenge of being expected to perform in every match is one he relishes.

‘Expectation is honestly a burden when you start thinking about it too much. In the past, I have thought of things that are not necessary,’ Kohli added. 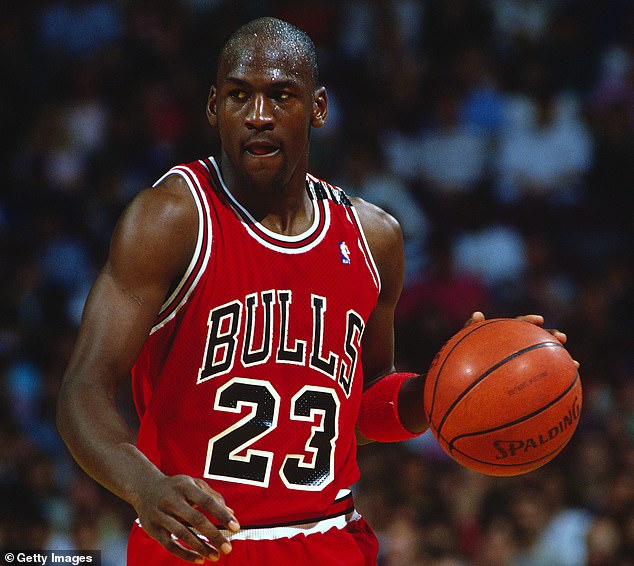 ‘If they’re not, I still continue on my journey and try and do it one more time. And that’s basically what you play for at the end of the day, you want to be in the challenge. I step onto the field every time now thinking, or knowing, that everyone is expecting me to do well.

‘The opposition knows. They want to get me out, I want to stay in because I know I can make a difference, and that’s the fun of it, that’s the challenge. It’s whoever cracks first. And why would you not want to be in such an exciting position?

‘To be in a position to test yourself every time that you play cricket, and that to me is an honour. It’s actually a privilege to be in that position, and you actually feel grateful that you are part of these moments where stakes are so high, and you have an opportunity as an individual to overcome your fears every time that you go out there to play, and then you become a better human being I presume after every game.’

Broad could play in Test officiated by his father