Birmingham: Australia have romped to a come-from-behind win for the ages to take a 1-0 lead in the Ashes and shatter an 18-year winless streak at England’s so-called fortress Edgbaston.

Tim Paine’s jubilant team completed a 251-run thrashing before tea on Monday to render as a distant memory England’s World Cup triumph of less than a month ago. 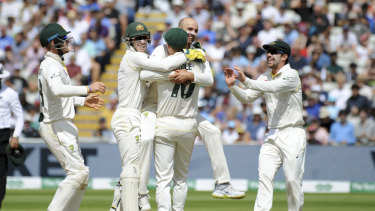 Australia has won the first Ashes Test in Edgbaston.Credit:AP

A draw, let alone such a victory margin, seemed an even more remote chance for Australia when they sunk to 8-122 in their first innings last Thursday, but after a staggering turnaround they will now head to Lord’s next week for the second Test with the upper hand in the series.

Not since 1981 had Australia won an Ashes Test in England after conceding a first-innings deficit.
It is the first time they have won the opening Test in England since 2005 and is the perfect start to their campaign to retain the Ashes and claim a first series here since 2001.

While Steve Smith’s unforgettable twin centuries in his Test comeback set up victory for Australia, it was Nathan Lyon (6-49) and Pat Cummins (4-32) who clinched it emphatically on Monday as England were bowled out in their second innings for 146. Both brought up milestone in the process, with Cummins registering 100 Test wickets shortly before Lyon reached the 350-mark, joining only Shane Warne, Glenn McGrath and Dennis Lillee in that territory.

Lyon made a turning last-day Edgbaston pitch his playground, destroying the hopes that the England top order had of mounting a dogged resistance, while Cummins was exceptional.

Facing the quixotic task of batting the day out things went pear-shaped for England after Jason Roy and Joe Root had taken them to 1-60. While victory wasn't an option, defence didn't seem a priority either when Roy advanced down the track to Lyon before lunch and was bowled for 28.

England had already lost fellow opener Rory Burns to a seaming delivery from Cummins that he fended with his glove to a waiting Lyon at point. 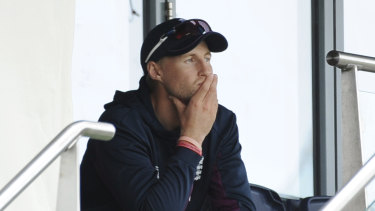 England captain Joe Root looks on from the stands as Australia romp to Ashes victory.Credit:AP

The off-spinner then had Joe Denly caught by Cameron Bancroft at short leg at 11, followed by the prized scalp of Joe Root for 28 before the first interval.

The wickets kept coming after the break, a refuelled Cummins clipping the off stump of Jos Buttler, who made only one, and then smacking a short one into Jonny Bairstow's wristband before it popped up to Cameron Bancroft in the slips to send him on his way for six.

Moments later Ben Stokes departed for the same score after edging a Lyon off break to Paine.

There were no surprises as Lyon removed Moeen Ali yet again, for four, and then Stuart Broad first ball to leave the visitors on the brink of wrapping it up.

Chris Woakes kept Australia waiting with an entertaining cameo alongside a hobbling James Anderson but it was all over when he steered Cummins to Smith in the slips on 37.

Cult hero smashes six sixes in an over