Lasith Malinga will captain Sri Lanka in a three-match Twenty20 series against Australia, while a number of young players from the team that performed well on the tour of Pakistan have retained their places. 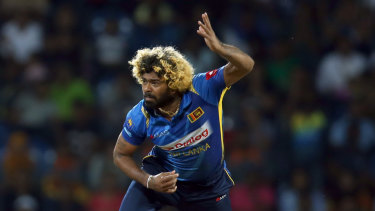 Kusal Perera, Kusal Mendis and Niroshan Dickwella were the other senior players included in a 16-man squad announced on Thursday (Friday AEDT).

Sri Lanka sent a second-string team to Pakistan to play ODI and Twenty20 series after several withdrawals over security concerns.

Sri Lanka lost the ODI series but stunned Pakistan with a 3-0 series sweep in the T20s without Malinga, who has already retired from ODIs. 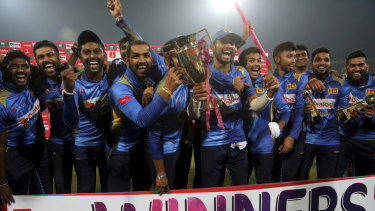 The Sri Lankans were surprise 3-0 winners in the recent T20 series in Pakistan.Credit:AP

It was the first long tour to Pakistan by a Sri Lankan national team since the 2009 attack on the team bus that killed eight people and injured some players.

International teams have avoided playing cricket in Pakistan for the past decade except for a few short series involving Zimbabwe, a World XI and Sri Lanka.

Sri Lanka gave players a choice over whether to tour Pakistan and a majority of regular players opted out.

Pakistan provided what it called presidential-level security for the touring Sri Lanka team.

The first T20 against Australia is in Adelaide on October 27, followed by the Gabba and the MCG.