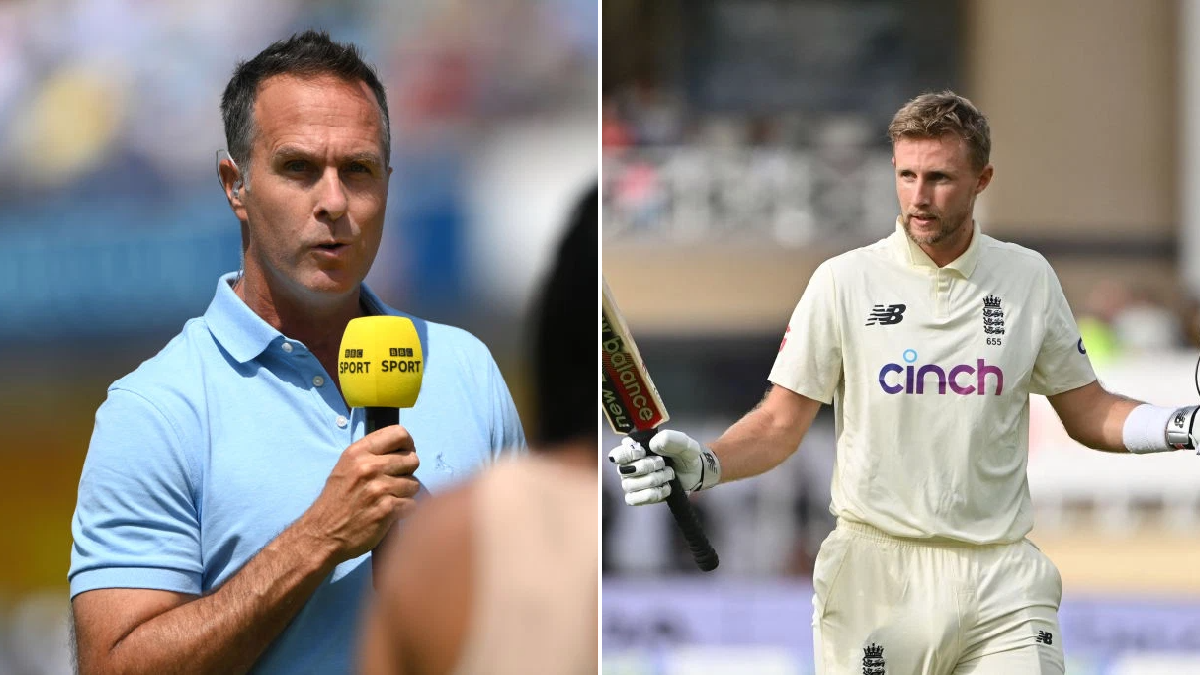 Kent star Crawley scored 33 runs in his two innings during the series opener at Trent Bridge, while Essex’s Lawrence made 25 runs.

England were skittled out for 183 on day one of the first Test but limited the damage with an impressive bowling display, with Ollie Robinson’s five-fer and four wickets from James Anderson ensuring the deficit remained less than 100.

Captain Joe Root scored a brilliant century in the third innings as England made 303 to set India 209 to win. Heading into the fifth and final day, India are 52-1, with all results still possible and the weather potentially having a say.

‘That was a wonderful day of Test cricket,’ Vaughan told BBC Test Match Special at the close of play on day four. ‘That hundred from Joe Root – we’ve seen him play plenty of magnificent innings but that was just pure.

‘Those cover drives, the late cuts, the way he played the spinners and Ravindra Jadeja, it was fantastic.

‘He would never admit it but he does carry this batting line-up. And it means he’s not always at his smiley, chirpy best. But he was back there today and it’s exactly what you want to see.

‘When Joe Root is smiling, no matter the situation of the game, that’s when he’s at his best and it’s a great example to all young players.’

England still trailed by 49 when Root came to the crease but the Yorkshireman instantly changed the tempo with a brilliant innings that kept the hosts in the game.

He reached his 21th Test century in the evening session and Trent Bridge erupted as he enjoyed one of his more passionate celebrations, pounding his chest and gesturing to his wife in the ground.

On England’s Test captain, Vaughan added: ‘Joe Root is the sole batter in the team who you feel is of the highest class in Tests.

‘How he can produce that quality under pressure is because he’s got confidence in his technique.

‘He didn’t go for that chase against New Zealand because he wasn’t sure of his technique so didn’t want to take the risk.

‘But his technique looked so more assured today, he knew exactly what he was doing and that meant he could be positive.

‘From where England were two days ago to where they are now, they have a glimmer of hope of winning because of their captain.’

Regardless of the outcome of this match, England may look to make some changes for the Lord’s Test which starts on Thursday.

Crawley has struggled in Test cricket since his stunning 267 against Pakistan last summer, while Lawrence averages less than 30 from his seven matches to date.

Vaughan ‘wouldn’t play’ Crawley or Lawrence at Lord’s, tipping a long-awaited recall for Haseeb Hameed and a Test comeback for Dawid Malan.

‘Zak Crawley could be a high-class Test match player but he’s not got enough runs,’ Vaughan said. ‘I wouldn’t play Crawley at Lord’s but he could well go to Australia.

‘He could suit going out of this environment for a while, play some different formats, iron out his technique. It could refresh him.

‘Dom Sibley has done enough to stay in the side but you wonder how much further he can progress. He just can’t go up through the gears and the bowlers are able to control him.

‘I would bring Haseeb Hameed in for Zak Crawley. I’d also bring Dawid Malan in but he’s clearly not in England’s Test plans.

‘Dan Lawrence has the ability to hit some high-quality shots but you certainly wouldn’t mind bowling to him early on in his innings with that technique.’