Australia star Alyssa Healy has expressed concern over the amount of women’s cricket being played internationally as Australia prepare to travel to New Zealand for a limited-overs tour in late March.

The NSW Breakers captain will face Australian skipper Meg Lanning and Ellyse Perry on Wednesday in the WNCL season opener against Victoria in St Kilda. 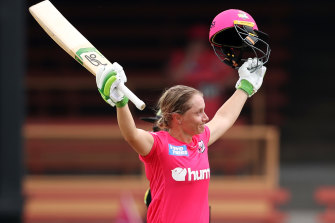 “But I’d like to see, definitely, some international cricket popping up a bit more frequently as we move forward.”

The 2020 ICC Women’s World Cup final at the MCG in March drew the biggest-ever crowd for a female cricket match with 86,174, just before the pandemic reached its peak. A documentary about the game will be released on Friday.

Healy said she feared the pandemic would hurt the huge progress made globally by the women’s game in recent years, and encouraged Cricket Australia to assist countries that may be struggling financially.

“The more that we can help one another out as countries, I think the better,” she said.

“Whether that be sharing the load funding wise … that’s a potential way for us to be able to get more cricket playing in places that are the most COVID safe.”

Healy said while the decision to overlook Haynes may seem “random or quite sudden” to fans, Darlington was selected with the aim of leading the team when the Australian squad leaves for New Zealand.

Darlington was captained by Haynes at the Sydney Thunder in 2019 and 2020.

“It’s the right call, she’s the future of this Breakers side,” Healy said. “For her to get that opportunity within the current group, with some outstanding leadership people around her, it’s the perfect environment for her to learn and grow as a leader.”