If England are to have any chance of winning at Lord's they need to find a way to get Steve Smith out. Smith is laughing at the England bowlers and captain Joe Root's tactics.

He was quoted after Edgbaston saying "it's like Christmas every day batting against England". He is right, but a comment like that should be embarrassing for the England players and should really hurt them. 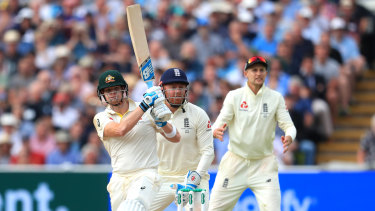 He might be unconventional, but Smith is also extraordinarily effective.Credit:PA

"Bodyline" was devised by Douglas Jardine for the Ashes series in Australia in 1932-33 to cut Don Bradman down to mortal size.

The guy kept making huge centuries and sometimes double and triple-hundreds that made it easier for batsmen at the other end. Bradman played 37 Tests against England. Of these Australia won 17 and Bradman averaged 111.57 with 13 hundreds. England beat Australia 11 times and in those matches Bradman averaged 45.45, with only two centuries.

Jardine cut Bradman's run-scoring in half and won the series 4-1 and England have to do the same to Smith, otherwise forget any talk of winning the Ashes.

Australia were able to make totals that demoralised the England bowlers and put the batsmen under scoreboard pressure.

This is exactly what Smith did to England in Australia two years ago and again in the first Test at Edgbaston.

It is staring us in the face. Smith is an unconventional batsman, he may look odd and different, but is a fantastic run-scorer. Nobody bats like him.

Just before the bowler delivers the ball, his back foot goes way across and outside off stump. His weight is on the back foot, which should make him a candidate for lbw to a ball well pitched up. But no, he plays it in the most amazing way "chest on" in front of his pads, absolutely the opposite to how we are taught to defend sideways on.

Bowling at an imaginary fourth or fifth stump in the corridor of uncertainty works against most batsmen, but he is a good judge of what to leave. When he does occasionally play at a ball and misses he gets so far across that it is difficult to bowl him out and, if it hits him on the pads, he cannot be out lbw because he is outside the line of off stump playing a stroke. 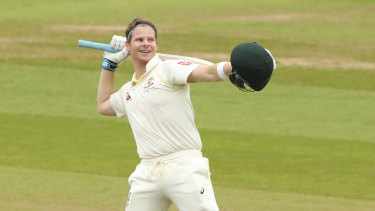 This has been a far too common sight for England after just one Test of this year’s series.Credit:SIPA USA

Just because that way of batting lifted our one-day team out of the doldrums to World Cup winners does not mean it works in Test cricket.

Every batting team in the world try to score quickly in white-ball cricket, so we have not come up with a different method.

It just took England a long time to catch on, change and become the best at it.

The best three Test batsmen in the world are Smith, Kane Williamson and Virat Kohli.

They have a sound defence, occupy the crease and do not worry about scoring rates.

Rory Burns did it in the first innings at Edgbaston, so what about more of our batsmen trying to bat like him for long periods? Make big hundreds that hurt the opposition. A Test match is over five days – it is not a sprint.

Thorpe can start by telling our players to play to the situation of the game and bat long periods like Smith.

If England keep batting like lemmings falling over a cliff then we are all in for a dreadful Ashes series. If it is not working, then it is time to change or some of the batsmen and some of the coaches need to go.

Paine may captain Pakistan tour but admits to player concerns