London: Australia have been labelled the team to beat at the World Cup but the defending champions declared they are still searching for the "perfect game".

Australia's surge through cricket's showpiece tournament continued on Sunday when they stormed to an 86-run win over a tardy New Zealand at Lord's. 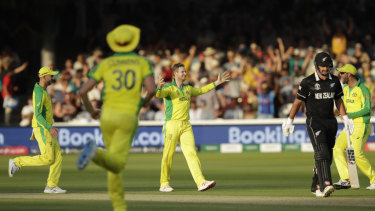 Team to beat: Trent Boult says Australia are hitting their straps at the right time.Credit:AP

The Black Caps left many bewildered with their slow batting in falling for 157 off 43.4 overs. Of the 262 deliveries they faced, 172 were dot balls.

Usman Khawaja (88 off 129 balls) rescued the Australians after they had slipped to 5-92 in the 22nd over, before Mitchell Starc, with the tournament-best figures of 5-26 off 9.4 overs, rolled the visitors, including dismissing Kane Williamson (40 off 51 balls), the Black Caps' skipper and batting plank. The Australians had privately admitted Williamson's controlled batting could work in their favour, and that was how it unfolded, as they posted their seventh win from eight matches to remain at the top of the table.

"World Cups, they [Australia] turn up for them. They, obviously, have an extremely good record at them. They are peaking nicely now," he said.

"Obviously, there are some quality sides here but it's all about timing in my opinion and they are performing well. There are a couple of weeks left and they will be the ones to beat."

Boult knows all about how good the Australians can be, for he was part of the Black Caps side crunched in the 2015 World Cup final at the MCG.

Starc, care of his second five-wicket haul of the tournament, now has a competition-high 24 wickets at 15.54 and has become only the second man behind Glenn McGrath to take at least 20 wickets in successive World Cups.

He led an attack that seems well-balanced and settled. Jason Behrendorff, the hero of the win over England, has thrived with the new ball, while Nathan Lyon has been more of threat than leggie Adam Zampa. If the dry weather continues, and the pitches turn, Lyon will have an integral role to play. 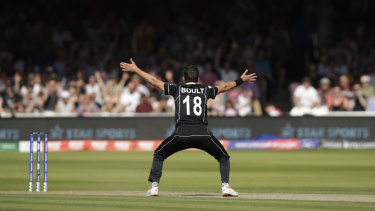 The Australians' only loss so far has been to India, in their third match, but they are not yet a complete package, according to Starc.

"We've always spoken about peaking towards the back end of the tournament, and we're still searching for that perfect performance," he said.

"We're not quite there yet. We're showing glimpses of what we are capable of with the ball and with the bat and in the field, but we have still got room to improve, and that's exciting for this group. We've got to play our best game in the semi now and, hopefully, better that in the final, and that's what tournament play is all about."

When it comes to "tournament play", the Australians appear to have a psychological hold on several nations. This was a side seven months ago that was in a state of flux, one without a game plan it believed in, one that had players more concerned about their own spots than a team-first ethos, and one missing the gold-plated skills of Steve Smith and David Warner.

That has changed considerably, and victory here would be perhaps as unexpected as the titles of 1987 and 1999.

The Australians will now look to fine-tune their semi-final preparations in their final pool clash, against South Africa in Manchester on Saturday.

Starc said remaining calm had been a key to the team's success in England, while they had found a way to take more wickets in the middle order since the defeat to India. The left-arm spearhead has been central to this but, against the Black Caps, even Smith claimed his first one-day international wicket since 2014 with his part-time leggies.

"Since that game, we've taken wickets through the middle fairly regularly and, whether it's attacking more … I think the biggest part was the execution," Starc said.

"We were all probably a little bit off in that Indian game and they had wickets in the shed and exploded at the end."

The Australians were given Sunday and Monday off and will gather for training mid-week.

Warner will remain in London where wife Candice is due to give birth to their third daughter.

"Good luck to the Warners and I think when we see him in Manchester, he'll have his hands full again," Starc said.