India coach Ravi Shastri has hailed his team's series-levelling victory in the second Test as "one of the great comebacks in the history of the game".

Defying predictions of a series whitewash after their capitulation in Adelaide, a new-look Indian XI missing superstar captain Virat Kohli overcame injuries to two star fast bowlers to pull off an incredible victory. 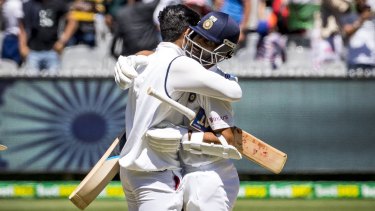 India captain Ajinkya Rahane, right, celebrates with teammate Shubman Gill after their victory in the second Test at the MCG.Credit:Chris Hopkins

"To be rolled over for 36 and three days later to get up and be ready to punch was outstanding. The boys deserve all the credit for the character they showed, real character."

In a big tick for their selectors, India's four inclusions for the game all returned handsome dividends. Debutant Shubman Gill fired with the bat, hitting 45 and an unbeaten 35 in a low-scoring game.

His place in the side is now secure, with out-of-form senior partner Mayank Agarwal in danger of being dropped if Rohit Sharma returns after two weeks of quarantine.

"I thought he looked very, very mature for someone playing his first Test match," Shastri said of Gill, 21.

"He looked calm and composed and wasn't afraid to play shots, which was great to see. In the second innings, it's easy to get into your shell but he played his natural game which was great from a team point of view."

Ravindra Jadeja starred with bat and ball, backing up his three wickets with a vital 57 while also taking two catches. And Rishabh Pant was praised for his counter-attacking 29, which was worth more than it appeared in the scorebook, Shastri said.

There is no substituting the runs Kohli brings to the Indian side but in Rahane they have found a back-up leader, though vastly different in style, capable of galvanising the party.

Shastri said Rahane's effort to bat for more than six hours in the most difficult conditions for batting was the turning point of the game.

"He's a very shrewd leader, he has a good understanding of the game, a good reader of the game," Shastri said. "His calmness and composure out in the middle helped the bowlers, helped the debutants as well. It was a calming influence there."

"You get into a complex in the change room where a defeatist attitude comes in. That is what didn't come in."

Amla in doubt for World Cup clash against Australia