Thirteen months on from tearing her hamstring off the bone, Ellyse Perry produced a moment on Wednesday to suggest she is nearing if not close to her physical peak.

With New Zealand chasing 272 to win the second one-day international, Perry leapt on the boundary rope to stop a Maddy Green six, throwing herself back and tossing the ball into the field of play acrobatically. 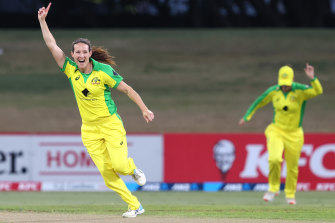 Australian vice-captain Rachael Haynes said it was an indication of Perry’s progress.

“Obviously to be back playing international cricket is a really huge achievement, given the injury that she’s coming back from,” Haynes said.

“Probably that’s a bit of a highlight in terms of where she’s at, and a good indication of how far she’s some.

“It’s poles apart in terms of probably where she started at the start of the year, and it’s really great to see her progressing. I hope that she’s acknowledging that too. I think she’s made some really great contributions throughout this series.”

Perry’s moment of magic came as her side showed that, while the Trans-Tasman travel bubble may be on its way, the Rose Bowl trophy won’t be heading back to New Zealand any time soon, with Australia’s 71-run win on Wednesday at Mount Maunganui ensuring their 23-match one-day international winning streak – a world record – continued.

The Rose Bowl hasn’t been won by NZ since 1999, while the Aussies remain unbeaten in bilateral ODI series since the 2013-14 summer.

White Ferns spinner Leigh Kasperek finished with 6-46 from her 10 overs – the best ever figures in an ODI against Australia – as the Aussies fell from 1-180 to 7-271.

Australia had been sent in by NZ skipper Amy Satterthwaite at the Bay Oval, but were soon on the front foot as Haynes (87 from 105 balls), Alyssa Healy (44 from 50) and Meg Lanning (49 from 51) took control. 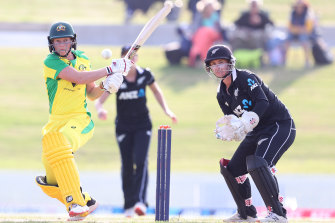 Meg Lanning in action with the willow against the New Zealand White Ferns at Bay Oval.Credit:Getty Images

The White Ferns, therefore, did relatively well to restrict Australia to a sub-300 total, but lost key wickets throughout the chase with Aussie tweakers Jess Jonassen (3-29 from 10 overs) and Georgia Wareham (2-39 from 10) playing key roles in what proved to be a comfortable victory, with NZ bowled out for 200 in an even 45 overs, well short of Australia’s 7-271 from their 50 overs.

Haynes was named player of the match and said the retention of the Rose Bowl meant more to the side than the winning streak.

She added that playing the series this time of year in New Zealand was highly beneficial in preparation for next year’s World Cup, which will be held in NZ early next year.

Eoin Morgan reflects on the World Cup final one year on