No man has more riding on the line at the Gabba than Tim Paine, whose place in Australian cricket history may hinge on the events of the final day of this landmark series.

The most unlikely of Australian captains has achieved all that could be reasonably asked of him since taking over after the trauma of Cape Town – but the halo has slipped. 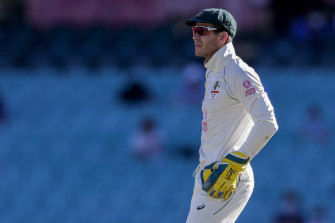 The pressure will be on Tim Paine on the final day of the fourth Test.Credit:AP

Leeway was given two years ago when he led an Australian team missing Steve Smith and David Warner but this is the unlosable series.

Australia have enjoyed every possible advantage. They've played at home, won every toss and had the deciding Test played at their Gabba fortress, where they have not lost since 1988.

India were expected to break after their capitulation in Adelaide. They have lost their captain Virat Kohli and their entire attack – but not a Test.

But even the most accomplished of Australian captains in Paine's lifetime have left the job with a blemish next to their name. The great Allan Border could not beat the West Indies. Steve Waugh could not win in India. Ricky Ponting lost twice in England, the first Australian captain to do so since Billy Murdoch in 1890.

Paine has the added pressure of being the face of a cultural revolution. His pledge to play with a smile on his dial will be put to the supreme test on a final day when all eyes will be on his team's performance and conduct.

Every comment and facial expression will be analysed, so too his reaction to any line-ball umpiring decisions. That's not even taking into account his work with the gloves, which is down from his exemplary standards.

Then there's Paine's nemesis – the decision review system. A poor user of DRS, Paine's frustration with technology has escalated since Christmas.

"He has got an ongoing love-hate relationship with DRS," Adam Gilchrist, who was noted for his fair play, said on Fox.

"He's made it very public and he needs to get over that. Whether he gets it right or wrong, he can't be so aggressively anti it, and uncertain of it.

"It's here to stay and it's the same for everyone. You can't let that emotional engagement get the better of him. That's part of leadership and the rest of the team will follow him in that regard. That's an area he needs to improve on."

Paine's tactical acumen has also been questioned after Australia's inability to win on the fifth day in Sydney and their troubles in Brisbane.

Shane Warne, one of his toughest critics, has given him a tick for his batting but not so his glovework and captaincy – the two areas selectors say they are marking him on.

Questions will be asked of Paine's leadership future if Australia do not win but coach Justin Langer last week could not have been more emphatic in his public support of his on-field general.

If Australia can win, and do so in the right manner, the halo will be restored.

‘Tiresome on the mind’: Starc warning on challenges of hub life

Australia v India: Mark Waugh doesn’t think David Warner should be asked who he wants to open with