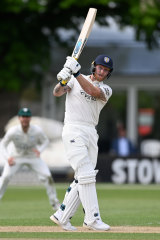 Ben Stokes hits out for Durham against Worcestershire.Credit:Getty Images

The match marked a breathtaking return to the pitch by Stokes since a knee injury he aggravated in March during England’s third Test defeat to the West Indies.

Stokes, announced as Joe Root’s successor last week, walked to the crease with his Durham side in the ascendancy at 4-360 in the second morning of their division two clash against Worcestershire at New Road.

The left-hander took just 47 balls to reach his half-century but went into overdrive thereafter as his second 50 took only 17 deliveries, with England under-19 left-arm spinner Josh Baker coming in for punishment.

Stokes’ fifth six took him to a century in 64 balls, shattering the Durham record for the quickest first-class ton as former teammate Paul Collingwood’s 75-ball knock against Somerset in 2005 was put in the shade.

Stokes was one blow away from emulating Garfield Sobers, the only batter in championship history to hit six sixes in an over, for Nottinghamshire in 1968. But another clean strike bounced just short of the long-on boundary and Stokes thumped his pads with his bat in despair.

His 17th six broke the county record held jointly by Andrew Symonds and Graham Napier, and he eventually holed out to deep midwicket on 161 from 88 deliveries, ending a 220-run stand alongside David Bedingham (135) in 28 overs.

“It was good fun,” Stokes said.