When Dr Prabodh Malhotra took his seat at the SCG for the Pink Test between Australia and South Africa, he could have been excused for taking his time to get up.

The retired Melbourne economist, 71, on Wednesday walked the final steps of a 1000-kilometre, 52-day trek between the Melbourne Cricket Ground and Sydney Cricket Ground to raise funds for the McGrath Foundation. 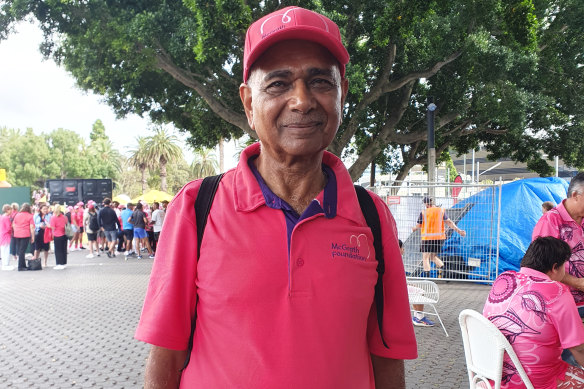 Prabodh Malhotra on the final day of his 1000-kilometre walk from Melbourne to Sydney to raise funds for the McGrath Foundation.Credit:AAP

His “crazy” idea to trek between the two great cricket grounds came this time last year when he saw a group of men walk 150 kilometres between Newcastle and the SCG for the breast cancer charity.

“I thought if they can do it and raise $1000 per kilometre, I should be able to raise the bar,” he said on Wednesday.

“I thought for a day or two and then, before the end of January, I’d signed up. 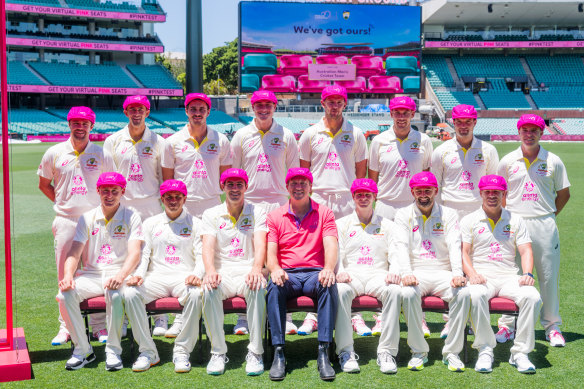 Former Australian cricketer Glenn McGrath with the Australian squad at the SCG ahead of the Pink Test.Credit:James Brickwood

They pointed to the paucity of footpaths and adequate road shoulders and the danger posed by trucks, buses and cars zooming by.

But Malhotra was undeterred.

With the help of friends, he set a course through Shepparton, Jindabyne, Canberra and Moss Vale, rotating through four pairs of shoes, including a now-rundown pair of Hokas.

He said he was taken aback by the generosity of people along the way.

Traders and accommodation providers declined payment and often donated to the McGrath Foundation when they discovered his charitable cause.

He was joined by the Newcastle group, known as the Big Three Trek, and breast cancer nurses on his final, short stint on Wednesday.

“To walk 1000 kilometres up from the MCG at the age of 71 just proves you can do anything you want if you put your mind to it,” McGrath said.

The Test cricket legend said funds raised by both walks and during the SCG’s Pink Test would help fund nurses for 2100 families going through breast cancer in 2023.

Meanwhile, Perrottet praised the trekkers and their supporters, committing $50,000 from his Premier’s Discretionary Fund to the McGrath Foundation.

One question remains: Will Malhotra trek again in 2024?

“I’ll cross that bridge when I come to it,” he said.

According to the Walk from MCG to SCG page on the McGrath Foundation website, he has raised just over $50,000 at the time of publication.

In need of some good news? The Greater Good newsletter delivers stories to your inbox to brighten your outlook. Sign up here.

For some Hundred is a saviour but will it kill cricket as we know it?