At least in Rory Burns England had one player on Saturday who was prepared to battle on the third day of what is becoming the most torrid of first Tests to try to avoid the crushing inevitability of a humiliating defeat.

Burns produced a long overdue display of application here to hold up South Africa on a day when Joe Root’s stricken England threatened to plumb new depths with a worryingly rudderless and tactically inept performance in the field.

England had started their second innings with hope all but extinguished by South Africa’s stroll to 272 and a near impossible target of 376 at a SuperSport Park ground where life for batsmen historically gets tougher and tougher. 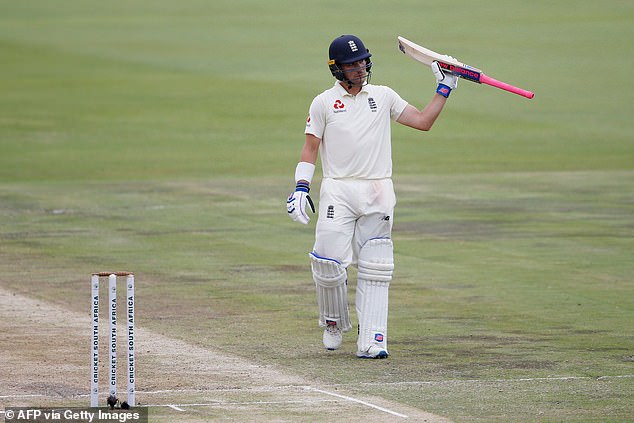 Rory Burns raises his bat after reaching his half century. The opener finished the day on 77*

It would not have been a total surprise if England, now battling a new outbreak of illness in a squad that has been decimated by it, had collapsed to yet another double figure score and defeat within three days of another overseas Test full of travel sickness.

But thankfully Burns again showed England have one opener who looks something like the real deal at Test level by surviving 117 balls and finishing unbeaten on 77 in England’s 121 for one at the close.

It will not be enough to deny South Africa an against all odds victory today in their first Test under the new management of Graeme Smith and Mark Boucher but at least it allowed England to regain a semblance of lost pride. 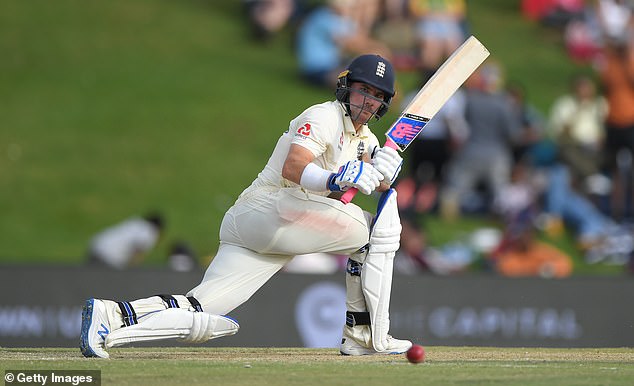 And, whisper it, if Burns can carry on like this during what is a painful rebuilding period for England’s Test side then he might emerge as the only viable alternative to an England captain in Root coming under increasing pressure.

The Surrey captain’s innings was far from flawless. He was given out in the first over but Chris Gaffaney had erred in his lbw call and Burns review was successful. He should have also been caught on 20 but was spilled by Rassie van der Dussen at slip and survived some anxious moments against the spin of Keshav Maharaj.

But England’s beggars cannot be choosers and for all his quirkiness of technique Burns clearly has the temperament to succeed at this rarefied level that has appeared to be lacking in his team-mates during three horrible days for English Test cricket.

There have been some bad sessions in England’s recent Test history – usually when they are batting – but yesterday morning was right up there with the very worst. 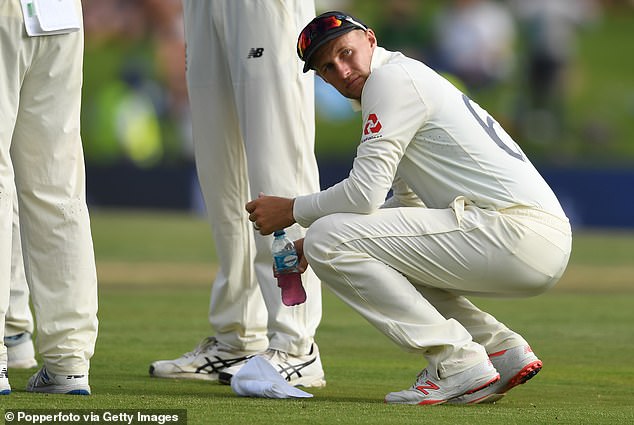 Where they should have come out firing if they were to have any chance of winning this first Test England were flat, uninspired and lacking in all imagination and penetration.

Admittedly they had been struck again by the sickness bug that has plagued them from the start of this tour with the latest victims being the key ones of Jos Buttler and Root. In all a remarkable 10 players and four backroom staff have been struck down so far.

So bad has the problem become that it actually appears this is a new ailment. Where early casualties developed ‘flu-type’ symptoms, the latest victims have been suffering more with a sickness bug. Either way it has hardly helped England’s cause.

But that is no excuse for the muddled way they went about their task on Saturday when they would have had a sniff of a chance if they could have bundled out the six remaining South African wickets cheaply. 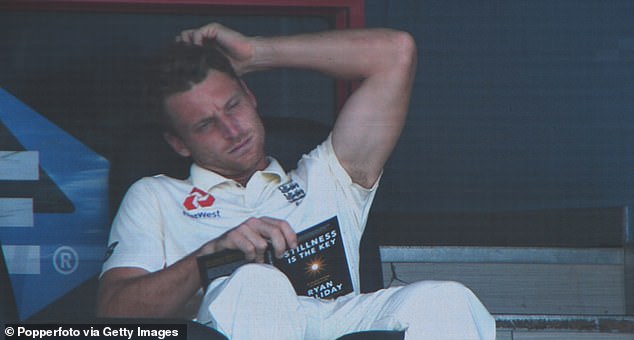 Instead they failed to take a single wicket until 90 minutes into the first session when debutant Van der Dussen was finally trapped lbw by Jofra Archer, who had inexplicably been held back by England until 45 minutes into the day.

It was a symptom of baffling tactics in the field by England which were maintained when Ben Stokes took over as captain after Root had been forced from the field to spend time in the ‘quarantine’ section of the dressing room alongside Buttler.

This grassy Centurion pitch really should have been made for England’s seamers yet they persisted in bowling short balls to a scattered field when good old fashioned line and length had worked perfectly for Vernon Philander when South Africa first bowled. 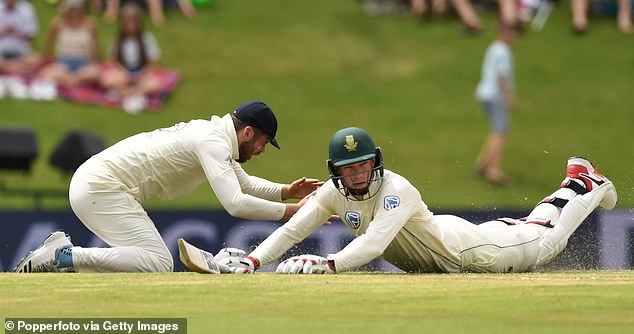 Dom Sibley fails to run out Rassie van der Dussen. The Batsman went on to make a half century

Twice Root departed for the sanctuary of the dressing room but there appeared to be no wisdom imparted on him by the coaching staff nor any change in England’s misguided tactics. They just blundered on as South Africa put the Test out of their reach.

It said everything about England’s woes that it took until 20 minutes before lunch before Archer finally dismissed nightwatchman Anrich Nortje after he had defied them for 89 deflating deliveries. Up in the commentary boxes old England bowlers like Darren Gough and Steve Harmison shook their heads in disbelief at Nortje’s resistance.

It was another mixed day for Archer, the summer superstar who has been given harsh lessons so far this winter in the reality of Test cricket. 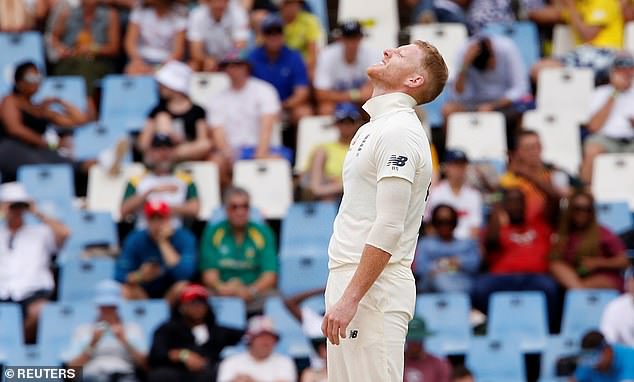 He began the day on a knife’s edge after being warned but not banished for two successive ‘beamers’ at Nortje on Friday night and after his belated arrival in England’s attack yesterday he took wickets and went for runs in equal measure.

Quinton de Kock made his intentions clear when he smashed Archer for successive sixes to get off the mark and by the time lunch finally offered England a respite they had conceded 125 runs in the session off just 24 overs and taken just three wickets.

The misery continued after the interval but when Sam Curran finally took the last South African wicket just before tea England faced a dizzying chase to win this first Test. 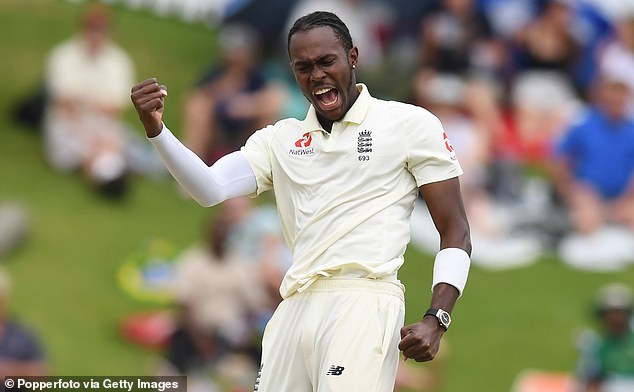 Jofra Archer celebrates after dismissing van der Dussen. He ended with figures of 5-102

At least Archer ended with his third five-wicket haul in Test cricket but it came at the considerable cost of 102 runs in 17 overs, his most expensive analysis in the long form of the game.

It left England in danger of again crumpling in a heap but Dom Sibley then looked the most comfortable he has done in Test cricket so far in putting on 92 with Burns before tamely lobbing a return catch to Maharaj.

Joe Denly survived with Burns to the close but England still have it all to do to get anywhere near what would be the eighth highest successful chase in Test history and the highest in South Africa.

It will surely not happen but at least England stopped the rot for a couple of hours. It may not be much but it is something.