The Sydney Sixers have finally managed to shake off the loss of Ash Gardner and keep their finals dreams alive, defeating the Sydney Thunder in a final-ball thriller on Wednesday night.

Gardner was again ruled out of the must-win match at Sydney Showgrounds after suffering her seventh career concussion during Sunday's match against the Adelaide Strikers. 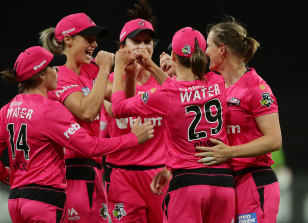 But the Sixers this time overcame Gardner's absence, their four-run victory snapping a five-match losing streak.

"The definition of insanity is doing the same thing over and over and expecting different results, so we definitely needed to change tonight," Sixer skipper Ellyse Perry said post-match.

Perry said it was a "really good question" as to when Gardner would return.

"I think she is going okay," she said. "She is certainly improving day by day; whether or not we will see her the next game or the game after is still a wait-and-see proposition.

"But she is certainly better and has a lot more spirit back and definitely looks better as well." 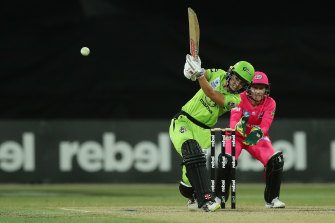 Phoebe Litchfield top-scored for the Thunder with 46 but her efforts were ultimately in vain.Credit:Getty

The Sydney sides' were originally supposed to meet in October, but the game was washed out without a ball bowled.

The Sixers' batters were eager to build a strong foundation early in their innings – something they have failed to do in recent games.

Alyssa Healy bounced back after a string of underwhelming individual efforts to build a 55-run opening partnership with Perry.

Shortly after the wicket of Healy for 44 off 22 balls, South African star Shabnim Ismail also dismissed Perry for 28.

With what is now becoming her signature underarm fist pump, Thunder young gun Hannah Darlington took the wicket of Angela Reakes before dismissing Jodie Hicks for a duck with the very next ball.

The effort had the Thunder chasing a 148 target with the Sixers posting 7-147.

The Sixers made the best possible start with the ball, van Niekerk claiming the early wicket of Tammy Beaumont with her first ball of the day.

Rachel Trenaman was trapped LBW by 18-year-old Stella Campbell for 16.

It was here the typically polished partnership of Heather Knight and Rachael Haynes was supposed to start firing, but they failed to deliver.

The dismissal of Knight for 16 created an opportunity for 17-year-old Phoebe Litchfield, who has been unable to prove her skills with the bat this season due to the dominance of the Haynes-Knight partnership.

After 10 overs, the Thunder were sitting at a shaky 3-56 – but Litchfield was ready to claim some time in the spotlight.

Building a strong partnership with Haynes before the skipper was out for 27, the teenager remained calm during the entire back end of the innings to keep the Thunder in the hunt.

Litchfield needed a six off the final ball to snatch the win, but Sixers star bowler Erin Burns instead claimed her wicket, dismissing the youngster for a stellar 46.

Nasser and Bumble: The eyes of the world will be on this Test