The Sydney Sixers are out to follow in the footsteps of the Melbourne Storm by winning the Big Bash without playing a home game all summer.

Cricket Australia's decision to shift the remaining regular-season BBL games from Sydney now means the Sixers will have chalked up more than 12,500km flying between Hobart, the Gold Coast, Perth, Canberra, Adelaide and Melbourne since December 5. 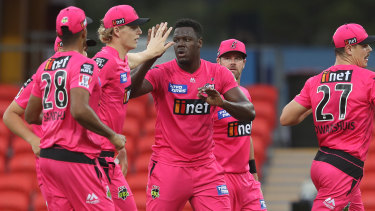 The Sixers will finish the regular season as the only side not to play at home.Credit:Getty

"It would be very important if we get the opportunity for that go ahead," Hughes said. "Having a home game advantage in finals is huge … they are conditions that you're used to."

Sixers boss Jodie Hawkins said the club would be out to emulate the Storm spirit and take out the premiership while based interstate.Mitchell Starc, Moises Henriques, Sean Abbott and Nathan Lyon are also all scheduled to return in the coming weeks.

"If you look at the Melbourne Storm, it's the season of winning away and you just have to do it any way you can,'' Hawkins said. "We'll start the conversation with Cricket Australia about finals next week, and we're hopeful we'll be able to get back [to Sydney]."

The Sixers will finish the regular season as the only side not to play at home. The second-placed Thunder have played at Manuka Oval nearly every year and are no strangers to the conditions in Canberra.

"The Thunder have been able to stay put in one spot longer than anyone else,'' Hawkins said. "They've had a good crack at Manuka and know the conditions well, and we don't really get that benefit."

Also disappointed by the decision for Sydney games to be relocated, Thunder skipper Callum Ferguson said the Sydney Test had given his side a false "glimmer of hope".

"We thought that might have given us a little bit more of a chance," he said. "But we've just got to ride the wave and take every challenge that comes."

"Obviously his health is the most important thing, not just now but in the long-term future," he said. "Now that he's passed all the tests, been through all the protocols, he's ready to go and excited to be playing in the derby.''