Australian cricket is holding its collective heart in its mouth after superstar Ellyse Perry suffered a suspected shoulder injury in the Sydney Sixers' last-ball defeat to the Melbourne Renegades at Sydney's Drummoyne Oval on Sunday.

Perry fell awkwardly trying to stop a six during the Renegades' run chase. The champion all-rounder remained on the field but looked in clear discomfort as she fielded later in the match. The extent of the injury remains unclear, although Sixers teammate Erin Burns said on ABC Radio after the match that she suspected the issue related to Perry's AC joint. 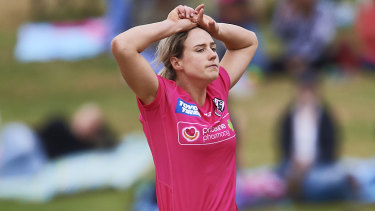 The clash itself was thrilling. Needing five to win from the final ball of the match, Renegades batter Courtney Webb hit Marizanne Kapp over the long-on boundary for six, icing a two-wicket win.

It helped avenge the Renegades' heartbreaking super over loss to the Sixers in last season's WBBL semi-final and left the Renegades in the top four.

Webb was named player of the match, making 34 not out from 31 balls.

"It was pretty crazy. I was just trying to swing as hard as I could and back myself to sort of hit to my strength areas, which is to the leg-side. Lucky a couple of them came off in the end," Webb told Channel Seven after the match. 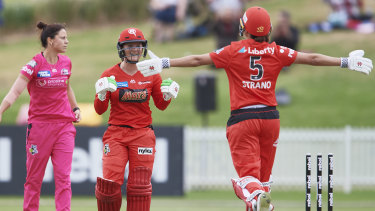 Winning ways: Player of the Match Courtney Webb (centre) celebrates with Molly Strano after sealing victory for the Renegades.Credit:Getty Images

Stand-in Renegades captain Molly Strano, leading her side in the absence of Jess Duffin to illness, took 2-24 from her four overs, while Lea Tahuhu claimed 2-20 from four.

Danni Wyatt anchored the chase for the Renegades, making 55 from 43 balls, while Carly Leeson made an important 16 off 10 balls from No. 9. The Renegades had needed 28 to win from the final two overs but had the answers.

The result left the Sixers in third place on the ladder. The Renegades are next in action against ladder-leaders Brisbane Heat at Junction Oval on Wednesday.

Ashes ratings: Smith soars and Lyon shines, but what about the rest?

Pucovski notches 82 on return, ‘looks to be enjoying his cricket’