Australian fast bowler Mitchell Starc has reached an in-principle insurance settlement in his $1.53 million fight for missing the 2018 Indian Premier League through injury.

The settlement came on Monday, just two days before the case was due to be heard in the Victorian County Court. Terms of the agreement, including a financial settlement, were not yet released but are due to be filed within days. Starc's manager Andrew Fraser did not respond when contacted for comment.

Starc filed a lawsuit in April last year against the insurers of his contract to represent the Kolkata Knight Riders in the IPL. 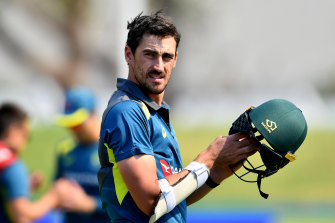 He had been drafted for $1.8 million but had to bypass the rich tournament after he was hurt during Australia's calamitous tour of South Africa, his series ending with a fracture of his right tibial bone in the third Test in Cape Town. Represented by Mills Oakley lawyers, he is suing a syndicate of Lloyd's of London, the long-running insurance market where coverage can be bought for unique circumstances that traditional insurers don't insure against.

In a case that twice had a court date rescheduled, Fraser used mediation talks in May to provide two pieces of footage from Fox Sports of Starc bowling during the second Test against the Proteas that had been used to strengthen his case. The mediation talks failed.

Starc's camp claim he bowled on uneven foot marks on a worn pitch and "suffered an injury to his right tibial bone , revealed by a sudden onset of pain in his right calf, which worsened over the next few bowling sessions and during the next Test match".

Clyde and Co lawyers, representing the insurer, and having disputed the timing of the injury in the second Test, claimed during mediation that they had not had time to assess the authenticity of the footage from March 10. Recent documents show they delivered subpoenas to Fox Sports, Nine Entertainment Co, the owner of this masthead, and CA for a full copy of video footage of not only the three Tests in South Africa but the four Tests Starc featured in through the earlier Ashes series in Australia.

Starc missed the Boxing Day Test because of a bruised right heel on his front landing foot but returned for the final clash in Sydney. The footage could be used to determine if Starc had experienced any injury issues, which were exacerbated and led to his problems in South Africa. Clyde and Co did not respond for comment.

According to the insurers, he needed to prove "he suffered a single, sudden and unexpected event, which occurred at an identifiable time and place".

A directions hearing in Melbourne last week confirmed the case had been due to go to trial on Wednesday.

The medical reports provided by experts was intriguing.

Dr Seamus Dalton, acting on behalf of the insurer, said: "In my opinion, the plaintiff did not suffer an injury or accident on 10 March 2018. Mr Starc became aware of the onset of right posterior and posteriolateral calf pain during the course of the second Test. Onset appears to have been gradual and symptoms continued over the course of the Test."

Starc turned to orthopaedic surgeon Russel Miller, who said the injury was "complex and multi-factorial" but "it is likely, on the balance of probabilities, that specific injury occurred on 10/03/2018, which was associated with extreme physical activity, including bowling on a pitch with 'uneven footmarks’. It is likely that the injury involved the progression of
bony stress reaction to bony stress fracture".

Starc could have secured a multi-million pay day should he have nominated for this year's IPL, which will open next month, having been rescheduled because of the coronavirus, but he has opted to spend time at home with cricketing wife, Alyssa ahead of the summer's blockbuster Test series against India.

Middlesex employ Cornish as 'advisor' a year after Somerset sacking