Paine has also said international teams will consider boycotting games against Afghanistan if that nation was allowed to take part in the T20 World Cup by the International Cricket Council. 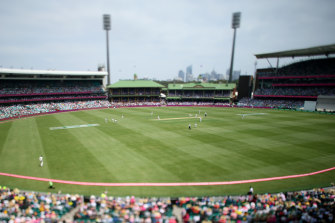 Tim Paine says the SCG Test should be moved to Hobart if the game cannot be hosted in Sydney.Credit:Getty Images

The Herald and The Age have reported Sydney could have its Test moved from its traditional New Year’s slot, a point contested by Cricket Australia. Paine, a Tasmanian, said he could not see the game being played in Sydney given the COVID situation in NSW, which announced 1542 new cases on Friday.

“The Sydney Test is the fourth Test of the Ashes, the fifth Test is in Perth, I find it very hard to believe the WA government are going to let us travel from Sydney to Perth for that fifth Test,” Paine said on SEN’s Jack & Painey show on Friday morning during an interview with Tasmania Premier Peter Gutwein.

“I’m proposing we get that New Year’s Test from Sydney, then we all fly straight to Perth, can you work on that from your end? I’ll start with my CA contacts, and you do it from your government level, I think we can pull it off.”

In a move supported by Paine, Cricket Australia has indicated it will axe Australia’s inaugural Test against Afghanistan, in Hobart, unless the Taliban backflips on its declaration that women will not be allowed to take part in cricket. 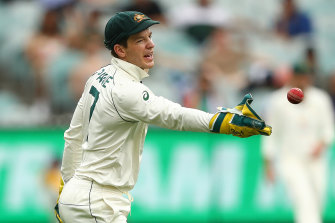 Gutwein said he has already lobbied Cricket Australia for Hobart to stage another Test should the fixture against Afghanistan be scrapped, which appears almost certain.

“That was certainly a point I made in meetings with representatives from Cricket Tasmania and Cricket Australia, who were there as well,” Gutwein said.

“If this doesn’t go ahead then what game can go ahead? I’d certainly like to advocate very strongly that Tasmania has the opportunity for a Test against another country should that opportunity arise. We’ll continue to press that.”

Pressure is mounting on the game’s world governing body to make a call on Afghanistan’s future as a full member should the nation go against ICC regulations by not fielding a women’s team.

The ICC has said it will discuss the matter at its next board meeting in October, but it may come too late to kick Afghanistan out of the T20 World Cup. Paine has called for an urgent response.

“At this stage we’ve heard from CA, the Australian government, the Australian Cricketers’ Association, as yet we’ve heard nothing from the ICC, which I think is fascinating given there’s a T20 World Cup in just over a month’s time and Afghanistan are in that,” Paine said.

“It will be interesting to see what happens in that space. Does a team get kicked out of the World Cup?

“We’ve heard literally no comment from the ICC. It will be interesting to see where that lands. But I would imagine it’s impossible if teams are pulling out from playing against them and governments are not letting them travel to our shores then how a team like that can be allowed to play in an ICC-sanctioned is going to be very, very hard to see.”

Paine is expecting teams to discuss not taking the field against Afghanistan. Australia has been drawn in a different group to Afghanistan at the World Cup.

“I think it will be something that will be discussed team by team. I know going years back there were teams that went to Zimbabwe with a similar thing under the Mugabe regime,” Paine said.

“It didn’t get to a stage where teams were pulling out, I think, but I know teams were sending half-strength teams because key players in those teams refused to go to that country or refused to play against them when they come.

“There was the famous Henry Olonga [case] – who was chased out of Zimbabwe after he went to a World Cup and protested against his government.

“It’s certainly happened but to see them pulled out of a tournament or have countries boycott it will be something teams discuss on the eve of the World Cup or the coming summer.”