Mitchell Starc can’t wait to see what Scott Boland does with a Dukes ball next year, even if it endangers his own dream of a more substantial role in the defence of the Ashes on English soil.

“If he’s doing that with a Kookaburra,” Starc says, “imagine what he can do on some of those wickets over there.” 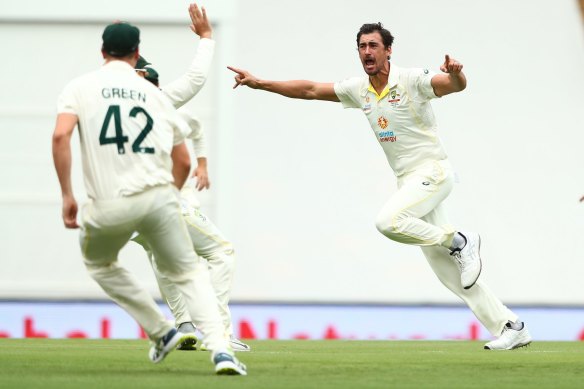 Mitchell Starc struck with the very first ball of the 2021-22 Ashes.Credit:Getty Images

Alongside his excitement about what Boland has added to Australia’s pace repertoire for the coming run of as many as 15 Test matches in eight months, Starc has a quiet resolve to be more than a cameo player on the 2023 Ashes tour.

Four years ago, as the touring team then led by Tim Paine emphasised economy and accuracy from the fast men, Starc played only one of five Tests – even if it was the critical Old Trafford match that sealed retention of the Ashes.

He came away from the trip feeling like he had learned a lot about offering fewer scoring opportunities to batters, but also that had compromised on his underlying qualities: left-arm variation and high pace.

It’s not the sort of territory Starc wishes to retrace, and he firmly believes that it is by returning to a simple, pace-oriented mindset after the tour that he has enjoyed the most fruitful few years of his Test career – 72 wickets at 25.72, conceding 3.10 runs an over and claiming a wicket every 49.7 deliveries.

“I certainly won’t be going over with the mindset of having to be economical first and foremost,” Starc says. “I guess the previous tour there was all about economy rates and being in control and whatnot, which we all bought into and that was great.

“But whilst buying into that and trying to change my game for it, I felt like it took away from my skill set and my strengths. So going back to trying to bowl fast and adding to that, rather than compromising pace to try and be accurate.

“I think I’ve been able to bring it all back together. Last year was probably my most consistent red-ball year without compromising pace, and being able to add a few things in like wobble seam I learned from the other two big fellas. So adding to it rather than compromising a strength to fit in.”

In Australia, against the West Indies over two Tests in Perth and Adelaide, then South Africa in Brisbane, Melbourne and Sydney, Starc will be the ideal offsider for Test skipper Pat Cummins and Josh Hazlewood. He is also the first pace bowler chosen in south Asian conditions, and can expect plenty of work in India. 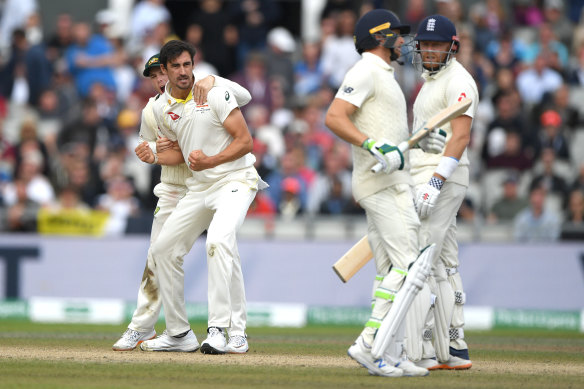 Mitchell Starc played one Test on the 2019 Ashes tour.Credit:Getty

In England, though, Starc will be striving to ensure he is not primarily a spectator in 2023, although he accepts that it may still be a possibility given Boland’s skills.

“What I bring to the table is being something different,” he says. “Being a left-armer and having a bit of extra air speed, rather than compromising, but just adding to it to better play my role for the group.

“If that means five Tests, great. If that means it’s much like last time where it’s conditions or match-ups based, that’s fine. But I won’t be compromising my strengths to do that.”

It’s been 12 years since Star made his international debut, as a painfully shy 20-year-old in a 50-over game against India at Vizag.

His Test career is still on the up, after plenty of memorable interludes where he rankled against being rested, faced sustained criticism from Shane Warne, and had to adjust his kit bag of skills after the Newlands scandal saw a severe reduction in the amount of reverse swing.

Starc has declined to join the Indian Premier League like many of his contemporaries because he reserves that time to share with his wife Alyssa Healy, and is perhaps happiest of all on the golf course.

During the Ashes last year, Starc elected to drive home early to Sydney for an extra couple of days at home and an extra 36 holes, rather than waiting for the team charter flight that was to follow. It was a reminder that Starc, after trying to fit in with the predominant culture of the team as a young player, now prefers to steer his own path.

“We finished the Test early, so it was either hang around in Victoria for a couple of days or take the option of driving the car back,” Starc says. “There were an extra couple of nights at home in our own bed and we got a couple of extra rounds of golf in Sydney, which was ideal.

“Certainly through the COVID stuff, golf was the only thing we were allowed to do. So it was an escape from the hotel, it was four-and-a-half hours away from cricket, it was a relaxing space. And you still get them time into your legs, walking 18 holes. That’s how I’ve used golf, as my outlet to get away from cricket.”

After his surprising omission from Australia’s final Twenty20 World Cup campaign, Starc said he had always put Test cricket at the very summit of his priorities. He now has a long run of Test matches in which to show exactly why.

NASSER HUSSAIN: Kohli is England's main threat in the way of a final