Mumbai Indians’ wretched IPL season may be just the circumstance to help the middle order axeman Tim David hammer his way into Australia’s Twenty20 squad ahead of a home World Cup later this year.

The national selectors George Bailey, Tony Dodemaide and head coach Andrew McDonald have already seen enough from David to know he is capable of having a major impact at international level.

Their question is when to add him to a Twenty20 side that is defending the world title claimed unexpectedly in the UAE last year. 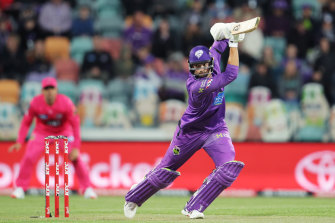 Tim David firing during the BBL for Hobart Hurricanes.Credit:Getty Images

While Marcus Stoinis and Matthew Wade made the middle order their own in that event, David’s skills make him a similarly tantalising prospect to that of Josh Inglis a year ago – only more so now he is playing IPL games again.

Australia will play as many as nine Twenty20 games between the looming tour of Sri Lanka – for which David has not been selected – and the cup defence that starts in October.

Bailey made the panel’s interest in David crystal clear when naming Australia’s list of centrally contracted players earlier in the year. Mumbai have four IPL games remaining, and their next is against Kolkata, the club of national captains Aaron Finch and Pat Cummins.

“I think the skill set he provides and where in particular he’s forging a reputation in that middle order, it’s a high-pressure, high-risk, high-reward spot to bat,” Bailey said. “So we’ve really enjoyed watching Tim’s development and hopefully he continues to get a good opportunity in the IPL and those skills continue to get exposed and he continues to grow.”

Purchased by Mumbai for a jaw-dropping $1.53 million at this year’s auction, David made just two appearances early in the tournament before finding that a lack of instant results put him on the fringes of the side.

However, the franchise captained by Rohit Sharma and Mahela Jayawardene proceeded to play so poorly they were effectively eliminated with almost half the campaign still to play. That has caused David to be recalled nearly a month later, and his two innings since have turned heads in the same way the 26-year-old has done around the world, striking at 160.28 across 93 Twenty20 games.

Against Gujarat Titans, including the canny Indian pace bowler Mohammed Shami and New Zealand’s speedy Lockie Ferguson, David rained sixes in a 21-ball blast worth 44. He lifted Mumbai to an unreachable tally after Kieron Pollard – long considered the most destructive middle order player in the Twenty20 game – struggled for effect.

David’s innings was all the more impressive for the fact that, with Mumbai’s run rate dropping, he rotated strike without taking risks against the wiles of Rashid Khan, before teeing off against the fast bowlers sure to be major players in the cup on home soil.

Analysing the innings was Daniel Vettori, who is squarely in the frame to become a key lieutenant for McDonald as a senior assistant later this year, as the new head coach builds his support staff after replacing Justin Langer.

“It’s such an impressive innings,” Vettori told ESPN Cricinfo. “It’s Shami, it’s Lockie Ferguson, he made it all look easy. Not one ball did he slog. It’s a big, tall man using his strength and using his ability. Forty-four off 21 when they were under a little bit of pressure. It would be fascinating to understand why a player of his class was left out when they had two available [overseas] slots.

“David has done this before in other leagues when he sat out a little bit. He’s putting together this resume where he should be the one who’s first selected. Australia are going to be looking at him with the power that he has. There’s a lot going on to be impressed with. You just don’t see such clean hitting with such pure shot-making at the back end of an IPL innings.”

Root and Bairstow both pass 50 as England progress against India