Mitchell Starc has declared hub life is not sustainable through cricket's COVID-19 times as players remain in the dark on how limited their freedoms will be this season.

The star paceman has committed to playing for the Sydney Sixers in the Big Bash in a major filip for Cricket Australia, but the uncertainty of the coming months is concerning him. 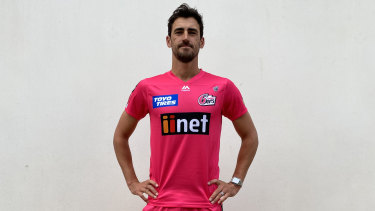 Mitchell Starc will return to the BBL with Sydney Sixers in January.

The calendar for the first half of 2021 is tight, with a Test tour of South Africa due to leave days after the BBL final on February 6, leaving little if any time off before next year's IPL – tentatively scheduled for late March through to May.

Australia's Test stars are yet to learn the extent of the biosecurity protocols that will be in place for the Border-Gavaskar series, with fears players will have to endure another repeat of their claustrophobic UK hub when their accommodation was at the cricket ground.

"When you're stuck in situations like that, month after month, going from bubble to bubble, and if those restrictions remain the same or quite similar, it can be quite tiresome on the mind and body as well," said Starc, who is playing for NSW in the Shield after turning his back on an IPL windfall to freshen up in the off-season.

"Certainly for myself to get that round of golf or walk around is a mental break from a day's play or a game. That's important for people's wellbeing.

"Then you throw in the extra hurdle with guys with families and kids going hub to hub, and bubble to bubble, you throw in some restrictions in terms of quarantine and then it makes it quite difficult."

Starc said he was unclear about the toughness of hub restrictions for the Test series against India.

"There's not been too much communication just yet. Things are starting to come through on what those six white-ball games will look like between Sydney and Canberra," he said.

"I couldn't tell you what the hub or bubble will look like in the Test summer, whether that's going to be quite strict, if it creates angst among families. There is a lot of questions to be asked and answered."

In developing protocols, CA has been working with infectious diseases expert Dr Cassy Workman, who also advised the National Rugby League on its biosecurity plan, and interim chief executive Nick Hockley said "we’ve been thinking about how we can give the players a bit more freedom".

“We’ve got a tiered approach, depending on what the conditions are," Hockley said. "If we’re in a jurisdiction where there has been no community transmission for a long time then we can open things up.

“There are freedoms. They can go out and get a cup of coffee, assuming that we get to that kind of risk level. But we’ll analyse it at the time. There are very clear protocols depending on what the environment is."