Virat Kohli was not happy with the umpires after day three of the second Test against England in Chennai. India are on course for an emphatic victory to level up the series at 1-1. The hosts set England a mammoth target of 482 to win after Ravi Ashwin’s stunning century led his side to 286 all out in their second innings.

Burns was then caught by Kohli at gully off Ashwin, before nightwatchman Jack Leach went first ball to give Axar Patel his second wicket.

England captain Joe Root had to trudge to the middle with just minutes of the day remaining.

And in the final over, India thought they had their man. 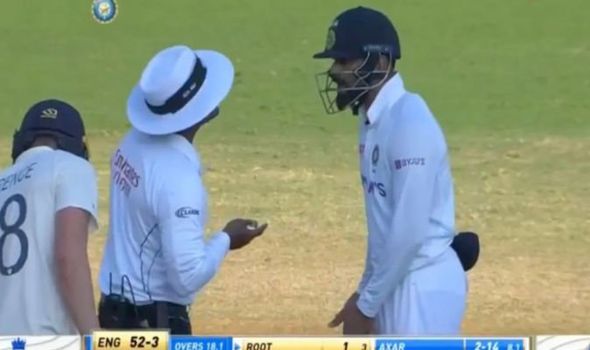 Patel trapped Root on the crease but umpire Nitin Menon kept his finger down despite vociferous appeals from bowler and fielders.

India were convinced it was out and Kolhi asked for the review.

However, the ball tracking system stated the impact for the LBW appeal was umpire’s call, and therefore the on-field decision stood.

Kohli was clearly unhappy with the decision and remonstrated with umpire Menon.

The 32-year-old continued to talk to the umpire at the close of play.

India coach Ravi Shastri was also irked, making his feelings clear to the umpire as they exited the field.

It was a sour end to an otherwise great day for India.

Ashwin struck his fifth Test match century and was delighted with how he played. 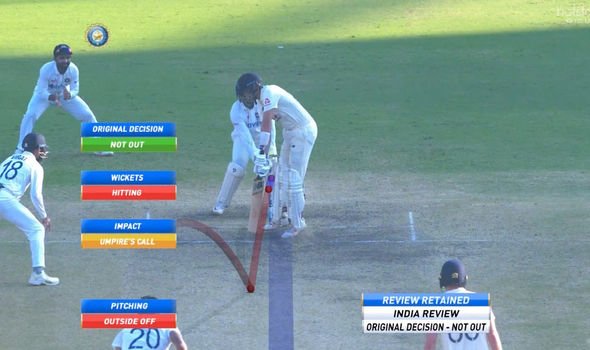 “The last time I was sweeping was when I was 19 years old and was dropped from the first XI after I got out,” he told Star Sports.

“I have started practicing the sweep; I can’t say if it has just been happening over the last three days.

“Vikram Rathour has been helpful in exploring new options. I’d love to credit him for how I’ve played with the bat in the last few months.

“I don’t know when I will play my next Test here, but I’m very pleased.

“I was just telling [Mohammed] Siraj to look at the line of the ball and go wherever he wants.

“It was a funny thing and it was exciting to see how he [Siraj] celebrated and that says a few things about the dressing room.

“The moment I got the runs and looked up at the balcony and the applause was thunderous.

‘I don’t BELIEVE it’: Match-fixing accusations after worst no-ball/wide in history