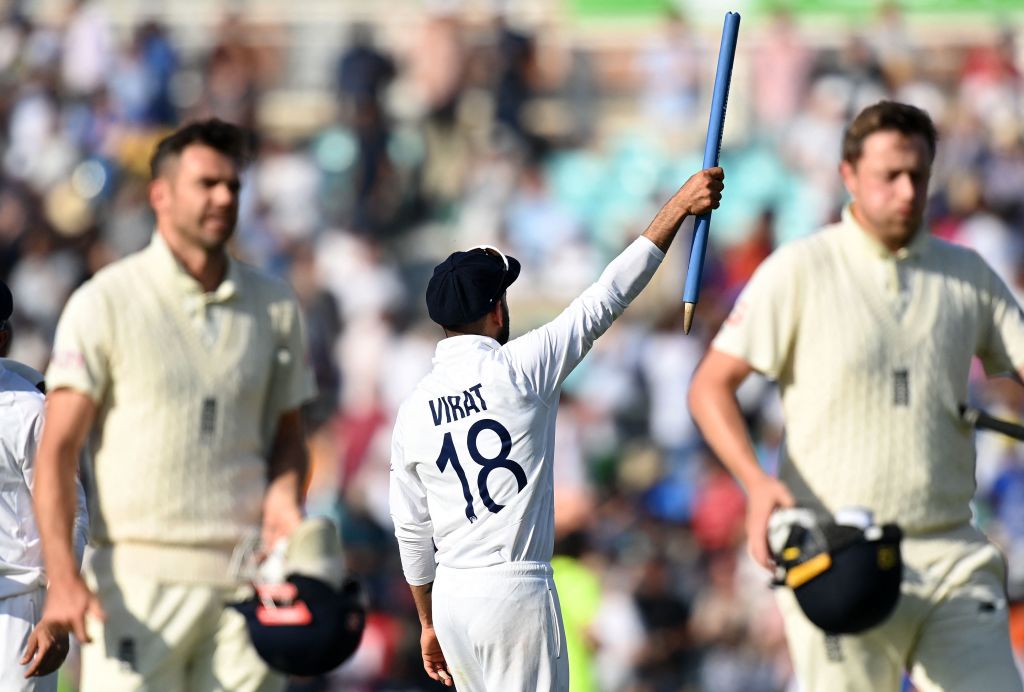 Virat Kohli said he was ‘really proud’ after India stunned England on the final day of the fourth Test to complete a stunning fightback at The Oval, while Joe Root expressed his ‘frustration’ after the tourists took an unassailable 2-1 lead in the series.

All four results were possible at the start of the day, with England 77-0 chasing a record 368 on a pitch that had proved good for batting over the past two days.

A draw appeared the most likely outcome after India made just two inroads in the morning session, but wickets tumbled in the afternoon as Jasprit Bumrah knocked over Ollie Pope and Jonny Bairstow, before in-form captain Root played on to Shardul Thakur.

Six wickets fell in all in a disastrous afternoon session for the hosts and India sealed an impressive 157-run victory after tea to go 2-1 up in the series ahead of the final Test at Old Trafford.

Root told BBC Test Match Special: ‘It’s frustrating. All four results were on the table. I thought we set a platform to go on and win the game. It was a brilliant spell of bowling that bust it open for India.

‘We’ve got to look at the whole game. Our catching has to improve. We’ll do dome learning. The good thing is we don’t have to long to dwell on it.

‘It’s been a fantastic series. You want to be on the right side of the results, but the quality has been high. I expect the same at Old Trafford.

‘We’ve got to manage that well. It’s something we’ll have to address when we get there. The injuries we’ve had are frustrating. We have to manage it as best as we can.

‘There is a lot going on. It’s good, hard Test cricket. We’ll be right up for it again when we get to Old Trafford.’

Kohli added: ‘I think the best thing about both wins has been the character that the side has shown.

‘If you look at how the game panned out – you mention the 100-run lead that England had in the first innings, to come back from there and the way we batted in the second innings, showed that we are not down and out, and we’re not looking to survive in this game.

‘If there is an opportunity to put the opposition under pressure, we will go for it and we put up a total on the board which was always going to be very difficult to chase, especially heading into the later half of day four and day five.

While England looked relatively untroubled before lunch, a brilliant spell from Bumrah sparked a dramatic collapse in the afternoon session.

The fast bowler beat the defence of Pope and Bairstow in successive overs, and Moeen was caught at short leg off Ravindra Jadeja shortly after.

Root, on the back of three consecutive centuries, briefly impressed with 36 but he played on with more than 40 overs remaining as England’s defiance wavered.

Umesh Yadav took the final three wickets – dismissing Woakes, Craig Overton and James Anderson – as India celebrated a brilliant victory that puts them 2-1 up in the series ahead of the fifth Test which starts on Friday.