This Big Bash clash had everything – the partnership of the tournament, between Melbourne Stars captain Glenn Maxwell and West Indies import Nicholas Pooran, a brilliant response from Sydney Sixers acting skipper Daniel Hughes and a dramatic finish that ended with the Sixers stealing the match by a wicket with a ball to spare.

The Sixers needed 20 runs from the final over to win. Maxwell made what seemed a curious decision to bowl that final over himself. It turned out he had little choice, on account of a calf strain to paceman and expert closer Nathan Coulter-Nile. 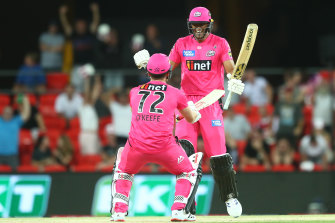 "So Glenn rightly made that call and unfortunately Nath will miss some games now. We've got a day off tomorrow and we'll see what the medical staff say.

"Hopefully he's not lost [for the rest of the season] because everyone saw what he did tonight – he's red-hot."

Hussey said the result could have been different had Coulter-Nile been able to bowl the critical last over.

Maxwell (71 not out from 47 balls) had combined with Pooran (65 from 26) for an exhilarating stand to lift the Stars after an early collapse. 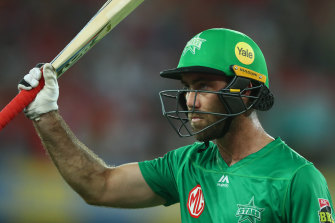 Glenn Maxwell fired with the bat for the Stars but bowled himself in the final over.Credit:Getty Images

They took 23 runs from one Dan Christian over and Pooran, in particular, was in unbelievable form, bringing up his half-century in just 16 balls. More than once he hit the ball cleanly for six over cover, taking apart the Sixers attack after being struck on the helmet.

Hughes, though, was the hero for the Sixers. He is not renowned for his big hitting but crashed seven sixes as he filled in for regular captain Moises Henriques.

"'DC' [Christian] and a couple of other blokes have just given me the confidence to go out there in the middle order and play my shots – swing easy, be calm when you need to be, and it came off today," the 31-year-old said afterwards. 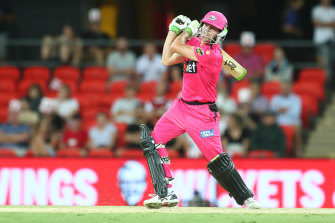 Daniel Hughes was brilliant for the Sixers.Credit:Getty Images

"Now that I know that it's there, it's just a matter of trying to repeat it over and over again, so we'll see how we go."