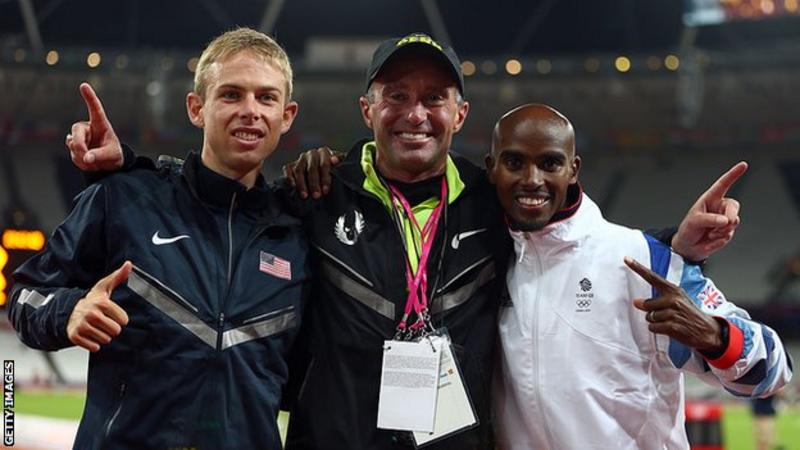 Alberto Salazar’s appeal against his four-year ban is unlikely to be heard before March 2020, the Court of Arbitration for Sport (Cas) has said.

Mo Farah’s former coach was found guilty of doping violations after an investigation, along with Dr Jeffrey Brown, who treated Salazar’s athletes.

In a statement, Cas said the appeals of both men had been registered.

It said the hearing schedule was adjusted due to the parties needing time to file their submissions.

Salazar ran the Nike Oregon Project (NOP), based in Beaverton, Oregon. It was established in 2001 and was the home of British four-time Olympic champion Mo Farah between 2011 and 2017.

The NOP was closed down by Nike last month.

A BBC Panorama programme in 2015 focusing on Salazar and the NOP prompted a four-year investigation by the US Anti-Doping Agency (Usada) and a two-year court battle behind closed doors. It eventually resulted in bans for both Salazar and Brown, announced last month.

An independent panel found the pair possessed and trafficked a banned performance-enhancing substance and administered or attempted to administer a prohibited method to multiple track and field athletes.

It added that Salazar “tampered and/or attempted to tamper with the doping control process”.

The panel also said Salazar and Brown “communicated repeatedly about the athletes of the Nike Oregon Project’s performance and medical conditions, exchanging information without any apparent formal authorisation by the athletes at the NOP or distinction between Dr Brown’s role as an athlete’s physician and NOP consultant.

Salazar maintained his innocence, and said at the time: “The Oregon Project has never and will never permit doping. I will appeal and look forward to this unfair and protracted process reaching the conclusion I know to be true.”

The World Anti-Doping Agency has said it will investigate all athletes who trained with Salazar.