When world history was made in Austria last month, four Australian distance runners played a small but consequential part.

They are Australian athletics' version of The Dish.

Like the satellite dish guiding the Apollo 11 to the moon from a cow field in NSW, the roles of four Australian distance runners were no less significant in towing Eliud Kipchoge around 42 kilometres of Vienna streets in less than two hours. 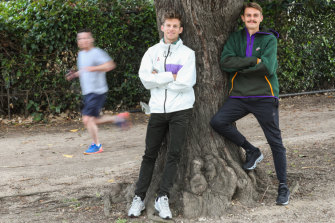 Brett Robinson and Jack Rayner were part of the team of pacers that helped Eliud Kipchoge break the two-hour mark.Credit:Jason South

There was a financial component to it – the pacers get paid – but the bigger incentive was being part of something momentous.

"It was to be part of history. It's like Roger Bannister breaking four minutes for the mile for the first time and 60 years later they are still talking about that, so we are part of history. People will always talk about it," Robinson said this week, back in Melbourne.

Rayner added: "You could not turn it down, being a runner, being a marathon runner you wanted to be part of it."

The part they played was significant enough that the assistance they provided Kipchoge ensured that the run is not regarded as a world record.

Working in teams of seven, the pacers would run five-kilometre sections, shielding Kipchoge from the wind and elements and dragging him along, before stepping off the track and with military synchronicity, handing over to a fresh crew to carry him through the next five kilometres.

They ran in an open V in front of Kipchoge, creating an arrow with a team captain at its point. Kipchoge ran behind the captain, then two more runners flanked him. They were like the Roulettes in runners.

In tight formation around the diminutive Kenyan, they were disciplined, looking like a presidential security detail in black singlets.

A pace car drove 15 metres ahead, shooting a laser to the ground to guide and pace the pacers' captain. Robinson was a team captain for his two five-kilometre legs. 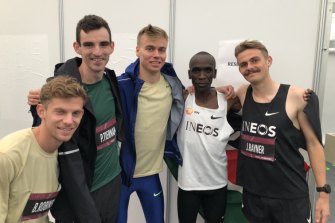 They had to keep a steady pace of two minutes 50 seconds per kilometre, or just over 21km/h.

"Pretty much the thing was to block the wind to give Kipchoge a nice, even pace, so he didn't waste any energy at all," Robinson said.

"For the aerodynamics we had to be really tight, we were running on top of one another to create that wind. It was like an opposite arrow.

"The crowd was so loud – there were 120,000 people on the route – and at one stage I had to tell one of my guys in front to get back a bit and I was yelling to him but he couldn't hear me."

Rayner added: "[Kipchoge] didn't say anything. It didn't even sound like he struggled, you would just hear him cough at times to clear his throat a bit.

"He just wanted to be able to run and we do everything else for him."

After their five-kilometre section, the pacers would step off, recover and maybe do another. Robinson ran two sections, from the 8-13km marks then again from 28-33 and Rayner had the glory runs, the first and last stretches. He was offered a third leg but turned it down.

"In a normal marathon a pacer would run from the start but then they would get to the 30k and would get tired and have to stop or the pace would slow down, where the plan here was to keep everyone fresh so they came in and out," Rayner said.

"That's why it's not an official world record, because of that."

Official or not, they remain in awe of what he did. Both of them had just run the London marathon (Rayner in 2:10:55 and Robinson in his first-ever marathon was next across in2:11:06, both Olympic qualifying times). It does not sound far off Kipchoge, but those 10 minutes place them a world apart.

"He is more mentally strong than anyone else but physically I don't think he is superior to anyone," Robinson said.

"They did tests when he tried it last time. They tested 15 people and he was mid-pack for all the physiological tests they do, so he wasn't anything special – there were people who were way better physically,

It is also one of the reasons that despite the many revelations about doping in Kenyan athletics they believe Kipchoge's edge is mental, not pharmaceutical.

For now the Australian runners who all celebrated at the dinner afterwards relish their part in making history.

"I went to the dentist this morning and the guy asked what I did and I said I was a runner and he was like 'oh did you watch that marathon where he broke the two hours?'

"I was like 'yeah, I saw that'. I eventually told him I was in it. The thing is I didn't actually see Kipchoge. People asked what I thought of his shoes, but he was looking at my feet, I wasn't looking at his."

Starc misses automatic Olympic qualifying height but still on the up